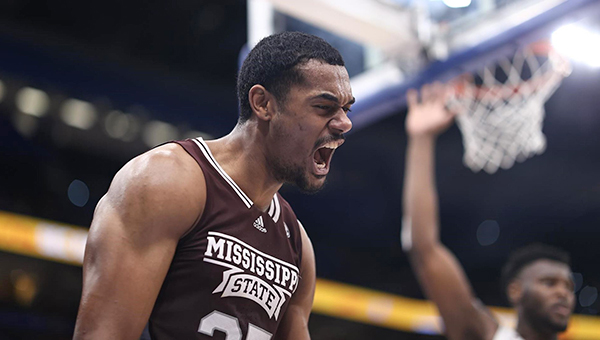 Mississippi State's Tolu Smith reacts after scoring a basket in an SEC Tournament game Thursday against South Carolina. Smith totaled 20 points and 12 rebounds to lead the Bulldogs to a 73-51 victory. (Mississippi State Athletics)

There’s a long way to go, but the Bulldogs took the first step Thursday night.

Tolu Smith totaled 20 points and 12 rebounds, and Mississippi State dominated the second half in beating South Carolina 73-51 in a second-round SEC tournament game.

South Carolina finished at 28 percent shooting for the game. They were 4-of-31 from the field (12.9 percent) in the second half. The Gamecocks were 13-for-29 in the first half.

“I thought that the second half, our defense was incredible,” Mississippi State coach Ben Howland said. “To hold a team to 12 percent from the field with two of those baskets coming off of our turnovers that led to two easy baskets … They’re a good shooting team. You saw they shot in the first half. They came out and shot like gangbusters from three.”

Mississippi State (18-14) advanced to play No. 2 seed Tennessee (23-7) in the quarterfinals Friday at 5 p.m. Tennessee beat the Bulldogs 72-63 in their regular-season meeting in Starkville.

“We were up with five minutes to go and gave up a 3 on the inbound, but they’re really good,” Howland said of Tennessee. “I mean, I’m so impressed with them, how they move the ball. They’re top ten in defensive efficiency in the country. They have depth.”

Smith was 8-of-14 shooting in collecting his fourth double-double this season for the Bulldogs.

Iverson Molinar added 19 points, though it came on only 6-of-20 shooting. Shakeel Moore added 12 points and five assists and Andersson Garcia had 12 rebounds.

Mississippi State scored on 19 layups in the second half, when it outscored South Carolina 37-17.

Erik Stevenson scored 18 points, including four 3-pointers on 11 attempts, and had five assists for South Carolina.

“We’re trying to get it inside to Tolu. He had a bunch of those, and some were definitely guarded, but I think we got a couple of really big transition baskets that were easy layups, and I thought we got a lot on offensive rebounding,” Howland said. “García gets six offensive rebounds tonight and had a number of those that were put-backs or got fouled on him.”