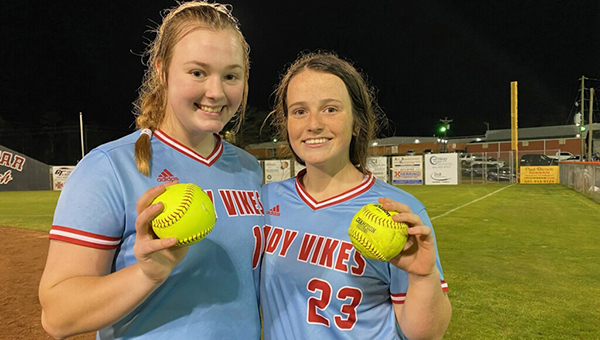 Warren Central softball players Abby Morgan, left, and Lola Crozier (23) show off the balls they hit for home runs in a 12-8 win over Loyd Star on Thursday. (Submitted to The Vicksburg Post)

Lola Crozier and Abby Morgan both homered, and the Lady Vikes scored in every inning except the first to hand Loyd Star its first loss of the softball season, 12-8, on Thursday.

Morgan went 4-for-4 with a double, home run and two RBIs. She hit a solo home run in the third inning that put Warren Central ahead 3-0, and an RBI double in the fifth.

Crozier hit a two-run home run in the fourth inning and finished with four RBIs.

Annalyn Nevels was 3-for-4 with a double, one RBI and two runs scored, Kamryn Morson drove in two runs and Tyra Bridges had two hits and scored twice. Adalyn Anderson also doubled and scored a run.

Warren Central (6-5) padded its lead in every inning, and eventially led 12-4 heading into the bottom of the seventh. Loyd Star (6-1) scored four runs in its last at-bat and got the tying run to the plate with one out. Maddie Pant was able to get a pair of ground outs to escape the jam, however, and earn a save.

Warren Central snapped a three-game losing streak and finished the unofficial first half of the season on a positive note. It will take a week off for spring break and return to action March 19 in a tournament hosted by Brookhaven High School.

Germantown 11, Vicksburg 0
Jordyn McClellan and Rivers Wilkins combined on a one-hitter, and Germantown (7-3) belted three home runs in a run-rule victory over Vicksburg High (0-6) on Thursday.

Allie Reich hit Germantown’s first home run, a solo shot in the third inning. Kaleigh Stevenson and Addison Lindley then went back-to-back in the fourth inning — Stevenson’s home run was a two-run shot — to put The Lady Mavericks ahead 10-0.

Vicksburg’s only hit was a leadoff single by Trinity McGloster in the fourth inning, and she was erased on a double play. The Missy Gators did not have another baserunner in the five-inning game.

After a week off for spring break, the Missy Gators will play in the Brookhaven tournament on March 19 and then travel across town to play Warren Central on March 21.