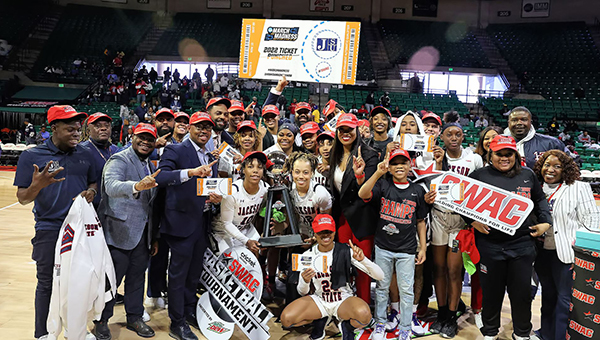 Jackson State (23-6) earned its nation-leading 21st straight win, and its 37th in a row against SWAC opponents. The Lady Tigers are the first team since Alabama State in 2015 and 2016 to win back-to-back SWAC tournament championships. Jackson State also earned a spot in the NCAA Tournament, and will find out its first-round assignment when the brackets are unveiled Sunday at 7 p.m. on ESPN and ESPN2.

Crump was 8-of-11 shooting with five steals and Dayzsha Rogan added 17 points, five assists and four steals. Ameshya Williams-Holliday, the SWAC’s Player of the Year, had 14 points and nine rebounds. Keshuna Luckett, LaMiracle Sims and Jariyah Covington had 11 points each as Jackson State shot 58 percent.

Jackson State surpassed the 100-point mark for the second time in four games.

The Lady Tigers edged the Lady Hornets 67-66 in last year’s title game but dominated this season’s two meetings, winning 79-52 on Jan. 8 and then by 21 in the tournament championship game.

Jackson State led by double figures the entire second half. A 3-pointer by Rogan with 2:43 left gave Jackson State its largest lead of 24 points.

An 11-point halftime lead grew to 19 during the third quarter after Rogan hit a couple of 3-pointers, and it was 71-56 heading into the final period.

Williams-Holliday went to the bench with her second foul early in the second quarter with the Lady Tigers leading by 12. The Lady Hornets took advantage with Williams-Holliday not defending the hoop, getting within seven before Covington scored five points in a 7-2 half-ending run to lead 49-38.