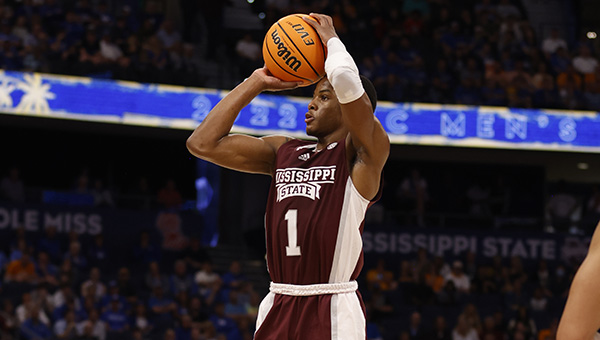 Mississippi State's Iverson Molinar shoots the basketball in an SEC Tournament game against Tennessee. Mississippi State was selected to play in the NIT, and will face Virginia on Wednesday. (Southeastern Conference)

Mississippi State and Alcorn State had their NCAA Tournament hopes dashed this weekend, but their seasons are far from over.

Both Magnolia State teams were selected to play in the NIT, the 32-team consolation tournament.

Mississippi State is the No. 3 seed in the Bottom Left Bracket of the tournament, but will go on the road for its first game because a renovation project at Humphrey Coliseum is scheduled to begin this week.

Mississippi State is making its third NIT appearance in five seasons. It reached the semifinals in 2018 and lost to Memphis in the championship game in 2021.

Alcorn State, meanwhile, earned its spot in the NIT by winning the Southwestern Athletic Conference regular-season championship. The Braves lost 87-62 to Texas Southern in the SWAC Tournament championship game on Saturday.

Texas A&M knocked top-25 opponents Auburn and Arkansas before losing 65-50 to No. 9 Tennessee in the Southeastern Conference Tournament championship game on Sunday. The loss snapped a seven-game winning streak for the Aggies, who were among the first four teams left out of the 68-team field for the NCAA Tournament.

Texas A&M is making its first NIT appearance since 2015, and eighth overall. Its last postseason trip was to the 2018 NCAA Tournament.