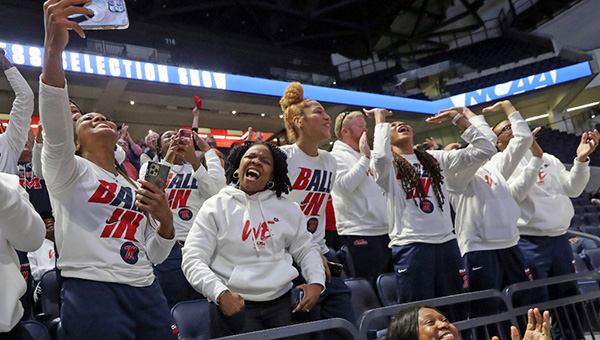 For the first time in 15 seasons, Ole Miss’ women’s basketball team is heading to the NCAA Tournament.

The Rebels received an at-large bid when the 68-team field was announced Sunday night, marking their 18th appearance overall but first since 2007.

Ole Miss (23-8) is the No. 7 seed in the Wichita Region and will play No. 10 seed South Dakota (27-5) Friday in Waco, Texas. The start time and television assignment have not yet been announced. The winner advances to play either No. 2 seed Baylor or No. 15 Hawaii next Sunday.

South Dakota has won nine games in a row, including three in the Summit League Tournament on its way to the conference title.

“I felt like we could have been the 6- or 5-seed, but we got the 7-seed and this is really a good matchup for us” Ole Miss coach Yolett McPhee-McCuin said. “Our team is familiar with their styles, and South Dakota is not so much familiar with our defensive style. I don’t know how they replicate it to prepare for us, where their style we’ve seen a few times this year.”

The bid is a culmination of a record setting year for Ole Miss, with its best finish in Southeastern Conference play since 1993 and its first 20-win season since 2007.

For only the second time in program history, the Rebels reached 10 wins in conference play. Shakira Austin was a first-team All-SEC selection and won the Gillom Trophy for the second year in a row as the top women’s college player in Mississippi. Angel Baker was named the SEC’s Sixth Woman of the Year.

“We’re going to pack our defense and our suitcase, and we’re going to defend at a high level,” McPhee-McCuin said. “We’re going to go to this tournament and act like we belong. We’ve been waiting on this moment. We didn’t just slide in. We’re grateful to have this opportunity and we plan on representing Ole Miss in the right way.”

While Ole Miss is ending a long NCAA Tournament drought, Jackson State is back for the second year in a row.

The Tigers rolled to the Southwestern Athletic Conference regular-season and tournament championships — they own the longest active winning streak in the country at 21 games — and were rewarded with the No. 14 seed in the Spokane Region.

Jackson State (23-6) will not have an easy assignment, though. It will head south to Baton Rouge to play No. 3 seed and subregional host LSU (25-5) on Saturday.

Coincidentally, the 2007-08 season also included an NCAA Tournament matchup between LSU and Jackson State. LSU won that first-round game 66-32 on its way to the Final Four.

Florida State and Ohio State will play the other first-round game in Baton Rouge. The winners will play each other on March 21. Times and TV assignments for all NCAA Women’s Tournament games have not yet been announced