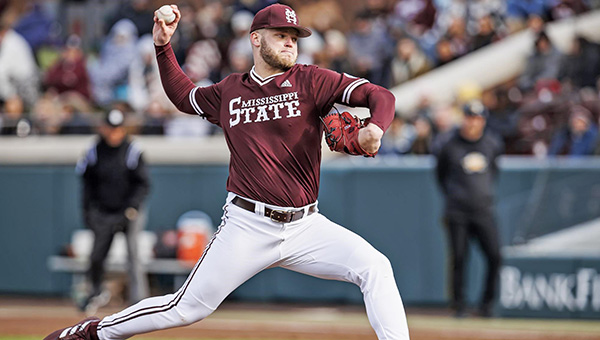 Mississippi State’s national title defense has had a bit of a rocky start so far, and it doesn’t look like it’s about to get any easier.

The Bulldogs’ pitching staff took a big hit Monday as starting pitcher Landon Sims and reliever Stone Simmons both announced that they will miss the rest of the season after tearing the ulnar collateral ligament in their elbow.

Simmons said in his Twitter post that he was injured on the last pitch of his outing against Tulane on March 5. He will have Tommy John surgery on Wednesday.

Sims’ last outing was March 4 against Tulane. He said he will have surgery to repair the ligament this week.
Sims had 13 saves as Mississippi State’s closer during the team’s run to the 2021 national championship. He was shifted to the Friday night starter role this season.

“Although this is not the way I want my season and possibly Bulldog career to end, I know that it is a part of a bigger plan that might sometimes be hard to understand, but I know I will always find myself going down the path I am supposed to be on,” Sims wrote.

Simmons, a right-handed junior, appeared in 19 games in 2021 and three this season. He did not allow a run and had six strikeouts in 4 1/3 innings in 2022 while working in a middle relief role.

“On my last pitch during my outing at Tulane, I suffered a torn UCL. I will be undergoing season-ending Tommy John surgery on Wednesday, March 16,” Simmons wrote. “I greatly appreciate your thoughts and prayers, and I am confident that I will be back even stronger.”

Mississippi State (11-7) begins its Southeastern Conference schedule Friday at Georgia. Preston Johnson appears to be in line to move into Sims’ role as the Friday night starter. Johnson started on Saturday in the first three series.

Johnson started the series opener last weekend against Princeton and had 10 strikeouts in six innings as the Bulldogs won 11-2.

Mississippi State won its fourth game in a row, and for the fifth time in six games, by beating Binghamton 13-5 on Monday. The Bulldogs used seven pitchers to get through their sixth game in seven days, and they combined for 17 strikeouts.

Mississippi State also hit four home runs — two by R.J. Yeager and one each by Hunter Hines and Tanner Leggett. Three of the four homers came during an eight-run rally in the eighth inning that propelled the Bulldogs to the win.