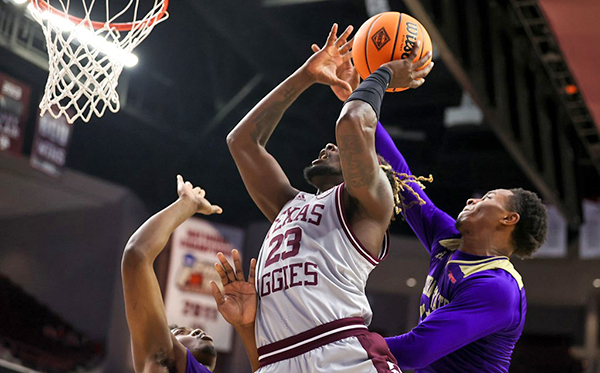 It wasn’t a huge surprise, then, that even if things didn’t work out in the end the Braves didn’t blink when facing one of the country’s hottest teams in the first round of the NIT.

Tyrece Radford finished with 14 points and 14 rebounds, and Texas A&M used a couple of big runs in the second half to finally put away a stubborn Alcorn State squad Tuesday night, 74-62.

“I think we did a good job competing against a very good, well-coached team. They’ve played great basketball and made a run in the SEC Tournament, so we just wanted to get out there and compete,” Alcorn coach Landon Bussie said. “They were the better and more physical team tonight. They got the opportunity, and they deserve to go to the next round.”

Texas A&M (24-12) advanced to play Oregon in the second round on either Saturday or Sunday.

Alcorn State (17-17), which qualified for the NIT by winning the Southwestern Athletic Conference regular-season championship, lost in its first postseason appearance since 2002.

The Braves’ non-conference schedule included games against NCAA Tournament No. 1 seeds Gonzaga and Baylor, as well as American Athletic Conference tournament champion Houston, and seemed to prepare them well for another road trip to a Power 5 conference opponent.

Alcorn went into halftime tied and took a 30-27 lead in the opening seconds of the second half.

“We had a really tough non-conference schedule,” Bussie said. “We play those games so we can be competitive in games like this and can be confident going up against teams like this. I think we did a good job just getting out there and competing.”

Eventually, though, Texas A&M’s depth took over. The Aggies took the lead for good with a 10-0 run, and Alcorn only made two field goals over a five-minute stretch later in the second half.

Texas A&M extended its lead to as many as 19 points and was not threatened in the last 10 minutes.
Dominic Brewton scored a season-high 20 points for Alcorn. Lenell Henry added 16 points and 10 rebounds, and Oddyst Walker had 10 points.

Both teams came into the NIT tired and with some disappointment following their conference tournaments.

“We were tired, we had an eight-hour bus ride down here yesterday turning around from Birmingham, but at this point in time, everybody’s tired. You’re not going to find one team that’s not dealing with injuries or a single team that’s not tired,” Bussie said. “You have to find something in the tank, something to dig out. We came out with a little more energy, but I think (Texas A&M) had more power, will and their physicality was overwhelming throughout the game.”

Texas A&M also played with a chip on its shoulder after being snubbed for an NCAA Tournament bid.

The Aggies were one of the first four teams left out of the big dance, despite winning seven games in a row coming down the stretch. The winning streak included victories over Top 25 opponents — and NCAA Tournament teams — Alabama, Auburn and Arkansas. Texas A&M received a No. 1 seed in the NIT, but it was obviously not a treasured consolation prize.

Coach Buzz Williams began his postgame press conference with a statement lasting nearly eight minutes in which he questioned why the NCAA Tournament selection committee didn’t invite the Aggies.

“The process is obviously flawed and it is apparent that there is way more included that is unseen and unknown in the selection of the 36 at-large teams than what the public is made aware of,” Williams said. “Until there is complete transparency and accountability, the system will stay broken and this will continue to happen.”