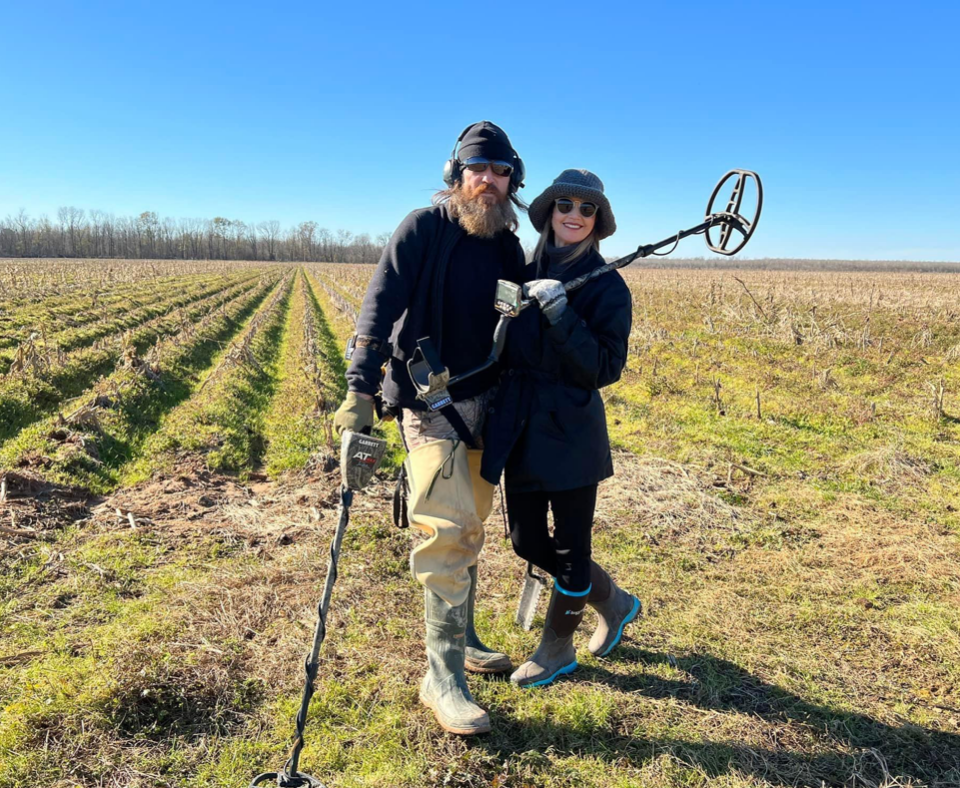 Jase Robertson, of “Duck Dynasty” fame, was recently in Vicksburg on a hunt, but it wasn’t for ducks.

He was looking for Civil War artifacts, and to help in the search, he was metal detecting — the A&E reality television personality’s newest hobby during the offseason of hunting.

Recently, Robertson along with other members of his family were in the River City to film an upcoming series geared toward metal detecting finds. The show is to be featured on the History Channel, Delta Landowner Rob Long said.

Long, who initiated the involvement with Robertson and the History Channel, had done so after he and a friend had done some metal detecting at Grant’s Canal, a property that had been owned by Long’s family before they deeded it to the National Park Service.

Long said prior to his metal detecting jaunt with his friend, he had done some research on the building of Grant’s Canal during the Civil War and had discovered a substantial amount of ordnance was fired at the dredges attempting to complete the canal.

“We know that many, many, many cannonballs were fired at Grant’s Canal when they were building it by the Confederate Army. The river was considerably closer over there in those days, because that was before the river changed course in 1876,” Long said, adding if it was at the distance it is today, the likelihood of the cannonballs reaching their targets would have been slim.

From his research, Long said he was hoping to locate some of the mortar rounds with a metal detector.

But before trekking out for buried treasure, Long said he enlisted the help of a seasoned metal detector —Bob Sullivan from Texas.

“He and a group of guys are in a club, and they go out together (metal detecting),” Long said.

One of the club members, Long said, even brought a towed array sonar, which is used for metal detecting at greater depths.

“They came over and found a large shell fragment and they found a bunch of old coins and minie balls,” Long said.

Although it wasn’t much, Long said, their hunt was not over.

“They had not given up yet,” he said. “On a third outing, the film crew hired by the History Channel and members of the Robertson family came and they did some filming.”

The scenes included taping scenes of what they were looking for, how they went about looking for it, how they identify certain items, how deep they could go in the search and how the equipment works.

Long said the History Channel is hoping to do a 10-to-12-part series on metal detecting and possible finds.

There were also sightings of the Robertson family at Eagle Lake, including Jase Robertson and his younger brother, Jep Robertson.

Urban legend has it there is a sunken Civil War boat somewhere in the 4,500-acre oxbow lake. The oxbow was created in 1866 when it was cut off from a bend of the Mississippi River.

Perhaps the mystery will be uncovered on one of the History Channel’s metal detecting series — those curious will have to watch the series to find out.

Metal detecting has become a popular sport, or cult as it was referred to on treasurenet.com.

In fact, the website said one brand of metal detector, Minelab, reported in 2020 that the company had sold 30-percent more detectors than in the previous year.

Long said he was surprised by the popularity of metal detecting but confessed there are some people he knows who are avid hobbyists, like Jase Robertson, and take metal detecting seriously.