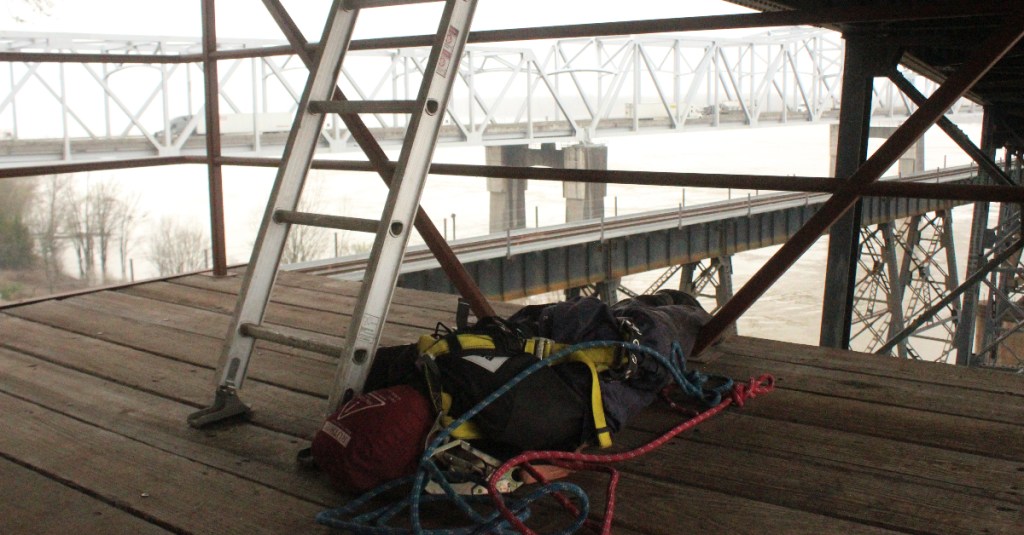 This mannequin was seen hanging from the Old Mississippi River Bridge on Wednesday morning. A bystander reported that someone was hanging from the bridge, but authorities verified it was part of a training exercise. (Photo by Ben Martin | The Vicksburg Post)

A figure seen hanging from the Old Mississippi River Bridge on Wednesday morning was not a person.

According to Vicksburg Fire Department Chief Craig Danczyk, a bystander called 911 to report a hanging victim at approximately 11 a.m. However, the figure was a mannequin in use as part of a rope rescue training course being conducted by private company E3 Environmental in partnership with VFD.

“It appears we have a bystander who made an assumption and called in what they thought was an emergency,” Danczyk said. “This is a training exercise that is part of a four-day class, which began in the classroom on Monday.”

Danczyk said the Old Mississippi River Bridge is the optimal location for bridge rescue training because it’s a “unique structure.” A similar training exercise — which also led to concerned bystanders calling 911 — was conducted on the bridge by E3 Environmental in June 2020.

“We are doing joint training to help them find the best practices to get someone off the bridge,” Danczyk said.

“We hire a private contractor to train us and this is a refresher course,” Smith said. “This time, we invited the fire department to join us because they’ve never been out here and we wanted to show them what we have and what we do out here.”

The program will conclude on Thursday.

John Surratt contributed to this report.