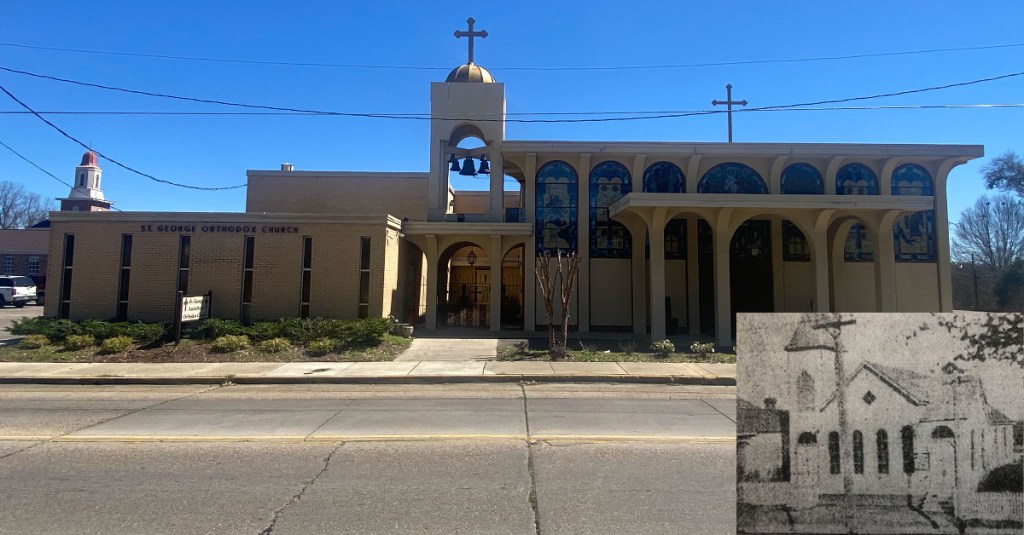 Syrian (Eastern) Orthodox Christians settled in Vicksburg as early as 1896.

They met in a number of homes where visiting priests would often lead services. In about 1910, they formed the Syrian Progressive Aid Society to perpetuate the faith of their forefathers and to establish a church. In 1910, one of their first tasks was to ask the City of Vicksburg to donate a lot in the city cemetery for the society and their members, which was granted.

By 1913, the society had 45 members and The Vicksburg Evening Post reported that “we learn that the Society is ambitious to aid in building a church for the Syrian population of this city, and has set apart a considerable sum of money as a nucleus for the proposed most worthy enterprise. No doubt leading citizens, members of other denominations, will give assistance when the time comes for beginning the work.”

In May 1913, the members announced that they would buy the South Washington Street Methodist Church and would make alterations and improvements and that the church hereafter will be known as St. George’s Church.  Construction on the South Washington Street Methodist Church was started in 1902 and completed in January 1904 at the cost of $800. It was a frame church with a two-story square tower on the left and a one-story one on the right. Entrances into the church were into each of these towers. When the church was sold, the congregation purchased a lot on the other side of Washington Street and built Gibson Memorial.

St. George’s congregation had the church building raised up so that there would be an exposed basement level. The entrance was moved to the center and three round towers were constructed on the roof. The building was clad in brick veneer and stained glass windows were added. The church was dedicated on Feb. 22, 1914, by the Rev. Raphel Hawaweeny, the “highest Syrian churchman in North America.”

The Vicksburg Post reported that “the dedication exercises lasted for several hours, mass being celebrated and many of the religious forms carried out. At the conclusion, the bishop delivered a very interesting address to the Vicksburg Syrians, who have purchased and fitted up their place of worship. He congratulated the little colony here on their fine work in securing the sacred edifice and expressed the desire that he might be able to come to Vicksburg again at some future date.”

In 1966, work was started on a new, modern church building at the same location. A two-story educational building was also added to the rear of the property. The new church was consecrated and dedicated on Sunday, Jan. 22, 1967, by His Eminence Metropolitan Philip Saliba, Archbishop of New York and all of North America.

Hundreds of people attended, with representatives from Orthodox congregations from Monroe, Shreveport, several Texas cities and Memphis. The Orthodox Church of Jackson came in a body. The service was followed by a congregational banquet at the Vicksburg Auditorium.

The new church, according to the Vicksburg Post, was built at a cost of $250,000. In April 1992, the memorial bell tower with gold cross and dome was added and in October 1992, five cast bells from Greece were placed in the tower.