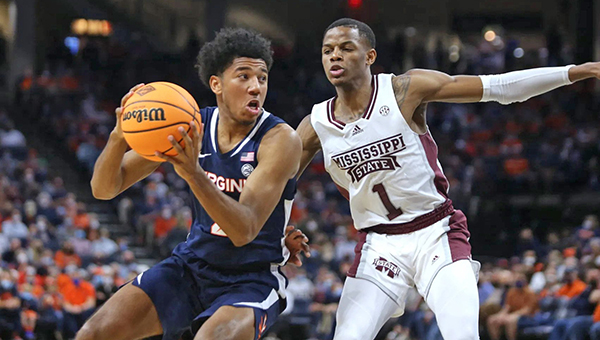 CHARLOTTESVILLE, Va. — Mississippi State had long stays during its last two trips to the NIT. This one was one-and-done.

Jayden Gardner had 16 points, Reece Beekman added 14, and Virginia dodged a shot at the buzzer to beat Mississippi State 60-57 in the first round of the NIT on Wednesday.

“At the end of the day, as I look at the stat sheet, we had 14 turnovers to their nine. That’s the difference in the game,” Mississippi State coach Ben Howland said.

Virginia never trailed after Gardner hit a jumper with 13:01 remaining to put his team ahead 38-36. The Cavaliers never led by more than eight points coming down the stretch, though, and nearly coughed up what seemed to be a safe lead in the final minute.

Beekman made two free throws with 35 seconds left to put Virginia ahead 60-53. The Cavaliers then missed their last three free throw attempts, which gave Mississippi State a chance at a big comeback.

Tolu Smith and Cameron Matthews both made baskets to get the Bulldogs within three points. Gardner missed two free throws with 4 seconds left that would have sealed it, and MSU got the rebound and the ball into the hands of their best player.

Iverson Molinar misfired on an off-balance and contested 3-point attempt, however, and Virginia escaped.
Molinar and Garrison Brooks finished with 13 points apiece for Mississippi State.

Virginia (20-13) advanced to the second round and will travel to play North Texas on Sunday night.
Mississippi State (18-16) reached the NIT semifinals in 2018 and the championship game last year, with an NCAA Tournament appearance in 2019 sandwiched between. This early exit, though, sent the program into an uncertain offseason.

Howland has gotten the Bulldogs to the NCAA Tournament only once in his seven seasons in Starkville, and rumors have swirled recently about his future with the program. Howland brushed aside questions about the subject following an SEC Tournament loss to Tennessee and again Wednesday, but his players said he has their support.

“I think we had a lot of adversity this year, especially myself. Coach Howland did an amazing job handling it,” said Smith, who had 16 points and 11 rebounds against Virginia. “We had a lot of injuries on our team. I’m not trying to make any excuses, but it’s tough for any program to go through that. I feel that Coach Howland did an amazing job. Personally, I’d love for him to come back next year.”