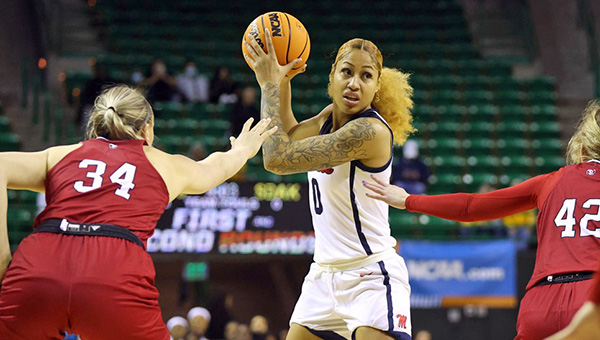 WACO, Texas (AP) — Hannah Sjerven looked around as the final seconds wound down and the vocal batch of South Dakota fans chanted “U-S-D” in anticipation of the school’s first NCAA Women’s Tournament victory.

The senior center tried to relate it to another feeling she’s had, but had to catch herself.

“Just looking around in that last 15 seconds when we knew that we had done it,” Sjerven said after a 75-61 first-round victory over Ole Miss on Friday. “It was a really good feeling, similar to … actually it’s not similar to anything we’ve experienced before. It was a great feeling, though.”

Sjerven had 20 points and seven rebounds, and fellow senior Chloe Lamb also scored 20 as the 10th-seeded Coyotes (28-5) broke through in their fourth consecutive tournament appearance and fifth in 10 eligible seasons.

The difference in experience showed with the Rebels (23-9) making their first NCAA appearance in 15 years. Seventh-seeded Ole Miss never led while shooting 27 percent in the first quarter and 39 percent for the game.

Shakira Austin, the leading scorer for the Rebels, was 3-of-16 from the field and finished with nine points and 11 rebounds. Angel Baker was the only Ole Miss player in double figures with 23.

Austin’s struggles epitomized the game for the Rebels. The 6-foot-5 senior was 1-of-7 from the field at the half, then missed three easy shots in the first minute of the third quarter.

“I wasn’t able to make shots,” said Austin, who won the Gillom Trophy as Mississippi’s top college player and was a first-team All-Southeastern Conference selection. “They were calling some flops and that definitely allowed it to get into my head for a few moments. It was frustrating. It was tough. It was definitely tough.”

Sjerven and Lamb were steady from the start, with Sjerven opening the game by swishing a 3-pointer and screaming toward the rafters at the home of Baylor, the No. 2 seed in the Wichita Regional. The Coyotes play the Baylor-Hawaii winner Sunday.

Lamb and Liv Korngable, who had 10 points and seven assists, embraced as the final buzzer sounded and their teammates converged for a group hug on one of the Bear logos.

Coach Dawn Plitzuweit smiled widely as the band played the school fight song. She and her players sang while facing the fans across from the team bench.

“We don’t even know what this looks like because we haven’t done this before,” Plitzuweit said. “Are we supposed to stay and watch the next team, the game? Are we supposed to recover? How much time do you get with your family? Those are all things we told them, ‘We’re going to figure this out.’ But our kids are pretty good I think in that moment.”

The Rebels were down six and had the ball early in the third quarter when Korngable knocked the ball out of Snudda Collins’ hands and took off the other way. Kyah Watson hit a shot, Lamb connected on a 3, and Watson scored again after another Ole Miss turnover for a 46-33 lead.

The Coyotes took control with a 13-0 run in the second quarter for a 32-16 lead. Lamb had a pair of buckets, and Korngable scored the last five points.

“We had said we didn’t want her to hit that 3, because it would give everybody on their team confidence,” McPhee-McCuin said. “Once she hit that, it gave them that momentum, and it kind of felt like it did in the past, maybe when we didn’t win a game. That’s just the sign of a young team. I think experienced teams know who they are.”

Ole Miss concluded a remarkable 2021-22 season with 23 wins, including 10 in SEC play for only the second time in program history and its first NCAA Tournament appearance since 2007.

“We will be back,” McPhee-McCuin said. “We will continue to grow.”