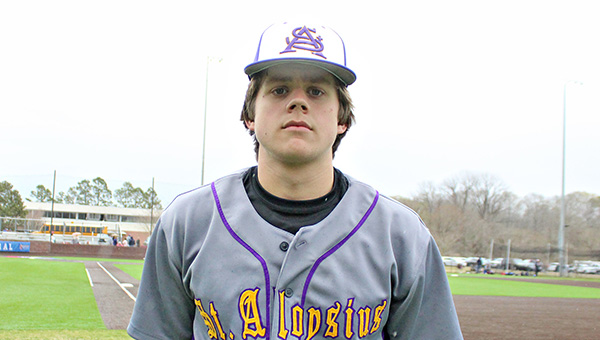 Landon Stanchfield hit a two-run, pinch-hit single in the bottom of the seventh inning to give St. Aloysius a 5-4 win over Heritage Academy on Thursday.

Landon Stanchfield made quite a spring break memory, even if St. Aloysius didn’t feel like celebrating the rest of its trip to the Coast.

Stanchfield hit a pinch-hit, two-RBI single in the bottom of the seventh inning to cap a huge comeback and give St. Aloysius a 5-4 walk-off victory over Heritage Academy on Thursday.

St. Al scored one run in the bottom half of the sixth inning, then four more in the seventh to overcome a 4-0 deficit and snap a four-game losing streak.

The winning rally started with a walk and an error. After a fielder’s choice, Matthew Pitre hit a two-run single to cut it to 4-3.

A passed ball put two runners in scoring position, then Stanchfield lined a single to center to bring both of them in and give the Flashes (4-8) the victory.

Pitre finished 2-for-4 with two RBIs and two runs scored. He also started on the mound and pitched six innings, allowing four runs on seven hits with four strikeouts.

Carson Smith doubled and drove in a run, and Cole Autrey had two hits and scored twice.

The game against Heritage was the first of three for St. Al at the Battle at the Beach spring break tournament on the Mississippi Gulf Coast, and the only one it won.

The Flashes tangled with a pair of MHSAA Class 6A opponents in their other two games, and lost 10-2 to D’Iberville on Thursday night and 12-0 to South Panola on Friday afternoon.

Blake Gollot drove in three runs for D’Iberville, Logan Forsythe was 2-for-3 with three runs scored, and Eli Page had six strikeouts in 2 1/3 innings of scoreless relief.

St. Al pitcher Adam Francisco had seven strikeouts in three innings. He also walked four batters and gave up seven runs. At the plate, Francisco singled and scored a run.

Smith hit a two-run single in the top of the first inning to stake St. Al to a 2-0 lead, but it did not score again.

The struggles continued against South Panola. The Tigers sent 17 batters to the plate and scored 12 runs in the bottom of the first inning on their way to a three-inning run-rule victory.

Williams also pitched a three-inning no-hitter. He struck out six of the 10 batters he faced. St. Al’s only baserunner was Barrett Shows, who reached on an error with two outs in the third inning.

St. Al will try to get back on the winning track — and earn its first MAIS District 3-5A victory — when it plays Central Hinds in a three-game series next week.

St. Al and Central Hinds will play a single game at Bazinsky Field Monday at 6 p.m., and then a doubleheader next Friday in Raymond beginning at 4 p.m.