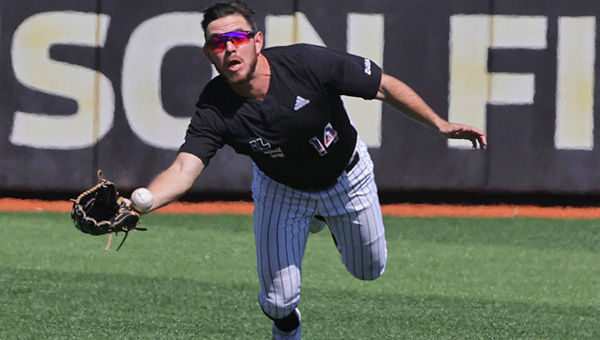 Southern Miss scored in each of its last three at-bats to beat Florida Atlantic 6-4 on Saturday.

The Golden Eagles added an insurance run in the eighth with a bases-loaded walk to Gabe Montenegro.

Montenegro finished with two RBIs and scored a run. Reece Ewing hit a solo home run in the fourth inning for Southern Miss.

Florida Atlantic had the tying runs on base in the top of the ninth, but Garrett Ramsey retired the last two batters for his second save of the season.

Southern Miss will go for the sweep in the series finale Sunday at 10:30 a.m. at Pete Taylor Park in Hattiesburg.

Georgia 12, Mississippi State 11
Cole Tate hit an RBI single with one out in the bottom of the ninth inning to give Georgia (16-3, 2-0 Southeastern Conference) a wild walk-off win over Mississippi State (11-9, 0-2) on Saturday.

Mississippi State blew an early 3-0 lead, then rallied from a four-run deficit to tie the game at 11 on a solo home run by Brad Cumbest in the top of the ninth.

In the bottom half, two of Georgia’s first three batters reached base and advanced into scoring position on a passed ball. MSU intentionally walked Ben Anderson, and then Tate delivered the game-winning single.

Corey Collins led Georgia at the plate by going 3-for-3 with a home run and four RBIs.

Mississippi State’s R.J. Yeager hit a grand slam in the seventh inning to tie the game at 10. Kellum Clark also homered for the visiting Bulldogs.

Mississippi State’s pitchers have allowed 23 runs in the first two games of the series. They walked 12 batters on Saturday.

Georgia will go for the sweep Sunday at 11 a.m.

Ole Miss 15, Auburn 2
Ole Miss secured its first series win at Auburn since 2009 and capped a high-scoring weekend on the Plains with a lopsided victory on Saturday.

Tim Elko, Hayden Leatherwood and Kemp Alderman all homered, and Peyton Chatagnier went 3-for-6 with three RBIs to lead the Rebels (15-4, 2-1 Southeastern Conference) to the victory.

Ole Miss scored three runs in the third inning, then four in both the fifth and sixth innings to take an 11-2 lead. The Rebels scored in each of their last five at-bats.

Ole Miss will play a home-and-home midweek series with Memphis on Tuesday and Wednesday. Tuesday’s game is in Memphis at 6 p.m., and Wednesday’s is in Oxford at 6:30.