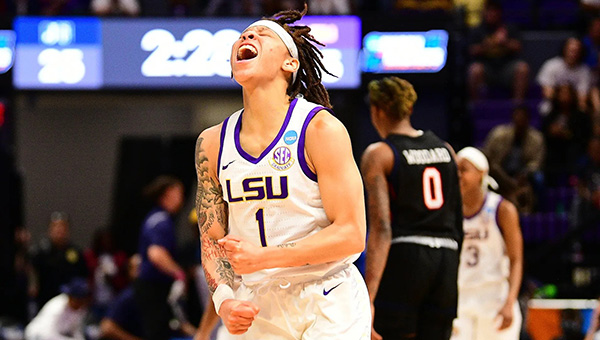 BATON ROUGE, La. (AP) — Khayla Poynter couldn’t help but contemplate the possible end of her college basketball career when LSU fell behind Jackson State by 10 points with less than five minutes to go in their first-round NCAA Women’s Tournament matchup.

She wound up extending three fingers above her head in triumph as a jubilant crowd showered her with cheers.

Poynter capped a 26-point performance with a tiebreaking 3-pointer in the final minute, and No. 3 seed LSU outscored Jackson State 19-3 during the final 4:42 to escape with an 83-77 victory on Saturday.

“I’ve said, ‘Oh my god,’ probably the past 10 minutes since the horn,” Pointer said, adding that she could not help but wonder late in the game whether the night would end with her and fellow seniors in tears and taking off their jerseys for the last time.

“A lot of that’s going through your mind at that time, but you just stay confident,” Pointer said. “We just kept going at it.”

Jailin Cherry scored 24 for LSU (26-5), hitting several key baskets during the stirring comeback that halted Jackson State’s winning streak at 21 and prevented what was nearly the first victory by a No. 14 seed or a Southwestern Athletic Conference team in the women’s NCAA Tournament.

Miya Crump scored 21 points for Jackson State (23-7), which erased a 17-point deficit in the third quarter and pulled further ahead in the fourth. Ameshya Williams-Holliday also had 15 points and 12 rebounds.

Jackson State had tied the game at 77 when Daja Woodard put back Keshuna Luckett’s missed free throw with 1:10 to go.

As time ran out, Hall of Fame coach Kim Mulkey, who left Baylor to oversee a remarkable turnaround for LSU, hugged Jackson State coach Tomekia Reed and appeared to tell her, “I don’t know how we won.”

Mulkey said she also told Reed that she’s a “heck of a coach and that her kids played their hearts out,” as well as, “You ain’t going to be at Jackson State long if they don’t pay you.”

Faustine Aifuwa had 17 points, 14 rebounds and seven blocked shots for LSU, which made six of its last eight shots after having missed 15 of 18 right before its final, game-flipping flourish.

“We love to have a big post presence because she bails us out a lot,” Cherry said of Aifuwa. “She really was a game-changer.”

The Tigers from Louisiana appeared in control in the third quarter when Pointer hit a layup, followed shortly after by two free throws, to give LSU its largest lead at 47-30. But Jackson State — also nicknamed the Tigers — responded with 10 straight points that included Luckett’s second-chance layup and a 3.

Pointer briefly stemmed the tide with a layup, but Jackson State eventually took a 54-52 lead with an 8-0 run that began with 3s by Dayzsha Rogan and Jariyah Covington and concluded with a layup by Woodard.

“They never gave up. They never stopped believing,” Reed said, while also lamenting her team missing 10 of 29 free throws, with three of those in the final three minutes. “You make free throws, I think it’s a different ballgame. But nevertheless, I’m extremely proud of our players.”

LSU guard Alexis Morris, playing for the first time in three games because of a Feb. 24 knee sprain, cut Jackson State’s lead to 58-57 at the end of the third by making three free throws after being fouled along the perimeter by Williams-Holliday.

“Even though we didn’t get the win, I think we played very good and very hard,” Williams-Holliday said after what ended up being her final college game.

The scored was tied at 21 in the second quarter when Aifuwa’s putback ignited a 20-7 run to finish the half. Cherry scored eight straight during the surge, with Pointer setting up two of those baskets in transition. LSU was ahead 41-28 at halftime.

But Pointer said she wasn’t surprised that Jackson State stormed back.

“It’s March. Everybody knows seeding doesn’t matter,” Pointer said. “It’s about who wants it the most.”