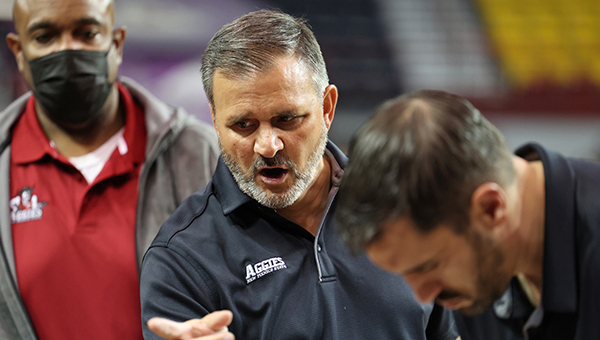 STARKVILLE — Chris Jans is the man for Mississippi State.

Jans, who led New Mexico State to the second round of the NCAA Tournament this season, was hired Sunday as Mississippi State’s next men’s basketball head coach.

He replaces Ben Howland, who was fired last week after seven seasons in Starkville.

“Coach Jans is a proven leader and winner, who is considered by many to be one of the top coaches in the game,’ MSU Director of Athletics John Cohen said in a statement announcing the hire. “He is a tireless recruiter, brilliant Xs and Os tactician, and his overall resume speaks for itself.”

“It’s no secret that Chris Jans’ name has been in the mix for a number of other jobs, especially after what he has done for our program over the last five seasons,” New Mexico State Director of Athletics Mario Moccia said in a statement. “This is an opportunity for Chris that is long overdue. What he accomplished in Las Cruces will be remembered forever, and we wish Chris the best of luck as he continues his head coaching career.”

Jans’ .765 winning percentage is fourth nationally among active head coaches. His 143 career wins is one of the highest totals for a coach over his first six seasons in NCAA history.

Jans spent one season as Bowling Green’s head coach, and worked in the same role at several junior colleges earlier in his 31-year career. The 52-year-old has also been an assistant at Idaho, Illinois State and Wichita State.

Jans was an assistant coach for Wichita State from 2007-14, and then again from 2015-17. During his first stint, the Shockers won the NIT championship in 2011 and reached the NCAA Tournament’s Final Four in 2013.

“Coach Jans is a proven leader and winner, who is considered by many to be one of the top coaches in the game,” Cohen said in his statement. “He is a tireless recruiter, brilliant Xs and Os tactician, and his overall resume speaks for itself.”