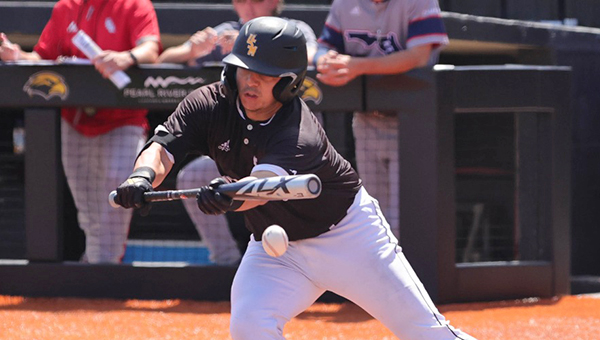 HATTIESBURG — A weekend of late-inning rallies did not end the way Southern Miss wanted it to.

Florida Atlantic scored five times in the top of the eighth to rally for a 7-3 victory over Southern Miss in the finale of a three-game baseball series Sunday at Pete Taylor Park.

Southern Miss won the first game of the series with a walk-off home run and the second by wiping out a three-run deficit in the sixth inning, then found itself on the wrong end of this comeback.

“Going into the series we knew we had a good team to face with FAU. We knew they weren’t going away after two losses,” Southern Miss coach Scott Berry said. “The intensity you have to bring on Sunday just wasn’t there today.”

With Southern Miss leading 2-1 in the eighth inning, the Owls scored five times on seven hits.

Dylan Goldstein started the rally with a double. After a single by Gabriel Rincones, Jr., to drive home Goldstein, Nolan Schanuel collected his fourth hit of the day. Shane Loden followed a strikeout by driving in a run with a single and then pinch hitter Shane Magrann knocked in two more runs with a double to right. The scoring finished with an RBI single by Armando Albert that put Florida Atlantic ahead 6-2.

“In this type of situation, you feel like you should’ve at least won one game this weekend, maybe two,” FAU coach John McCormack said. “It would’ve been easy to feel sorry for yourself, but I thought the guys played great. Jacob Josey was spectacular out of the bullpen. We’ve been waiting for that all year. I am really proud of the guys. They did a great job today.”

Josey (2-2) had five strikeouts and allowed two runs in 6 1/3 innings of relief for the Owls.

Will McGillis and Carson Paetow both hit solo home runs for Southern Miss (13-7, 2-1).

Although they won the series to get off to a good start in conference play, Berry was disappointed about the Golden Eagles’ trend of not closing out a series. The loss dropped their record to 2-3 on Sundays. They had a three-game overall winning streak snapped.

“We are 2-3 on Sundays,” Berry said. “We need to learn how to win there. More importantly we have had two opportunities on Sundays now to sweep on series and we just haven’t gotten the job outside of opening weekend against North Alabama.”

The Golden Eagles are on the road for their next four games ­— Tuesday night at New Orleans, and then a three-game Conference USA series at Western Kentucky beginning Friday.