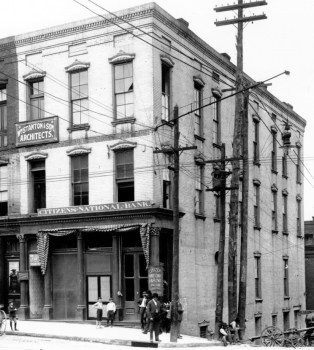 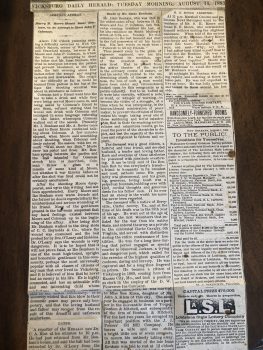 While it wasn’t at the O.K. Corral where the infamous shootout took place between outlaws and legendary lawmen Wyat Earp and Doc Holliday, a gunfight in Vicksburg two years later at Nick Camillo’s Saloon did make quite a stir, as reported in the Aug. 14, 1883, edition of the Vicksburg Daily Herald.

Located at the corner of Washington and Crawford streets in what is now Peterson’s, the brawl between H.H. Moore and John P. Coleman turned deadly — but ironically, not for either man.

According to a newspaper story Vicksburg resident Macy Whitney found in the Herald, at about 7:30 p.m. on that fateful August night, a “difficulty occurred” between Moore and Coleman.

Per the story, “Coleman and a friend went into the bar to take a drink and while they were being served, Moore came in, and being asked by Coleman’s friend to join them, refused, stating that he would not drink with Coleman and indulged in some language reflecting on the latter, whereupon Coleman walked out of the saloon.”

It appears from the newspaper story as Coleman walked out a Mr. I. (Issac) Bonham and Mr. A. Rector walked in, and knowing Moore and his friend, the two men started a conversation about Coleman.

During this conversation, according to the Herald, Coleman walked back into the saloon just in time to hear Moore saying something about “shooting.”

So, in response, Coleman said, “Well shoot me then.”

“Moore drew his pistol,” reported the Herald. “And fired.”

But instead of the bullet striking Coleman, Mr. Bonham, who sprang between the parties in an attempt to prevent bloodshed, was hit. The bullet entered his right side, the Herald reported, about four inches below his armpit.

Moore immediately got the heck out of Dodge after Bonham, whom the Herald described as a friend, was shot.

At the time of the shooting, the bullet wound had not been fatal, and Bonham walked to a drugstore owned by his father-in-law John Klein, where two doctors did some probing of his wound.

Unfortunately, like many gunshot wounds of the day, although the bullet had been removed by a Dr. C.A. Rice, Bonham died a week later at his home, The Corners Mansion.

Moore had surrendered himself to the police later that evening after the shooting and the Herald reported he was visibly upset at the time of his arrest.

“He burst into tears,” (policeman) Marshal Groom said. “And said, ‘Why, my God, I had rather been killed myself than to have shot Ike Bonham. He was my best friend. We had just taken a glass of beer together.’”

Bonham was 37 when he died.

The Virginia native’s obituary reported he had served in the Clark, Cavalry, 6th Virginia during his service in the Confederate Army and had been a special courier to Stonewall Jackson — “Which called for the exercise of the highest qualities of coolness, daring and bravery.”

Such irony, that after being in harm’s way during the War Between the States, Bonham died from a gunshot wound caused by a friend’s incitement of another.