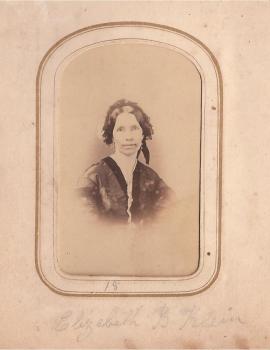 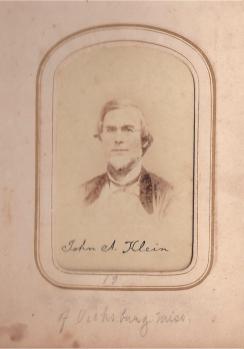 John Alexander Klein, for whom Klein Street is named. 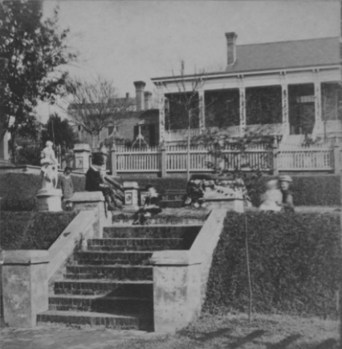 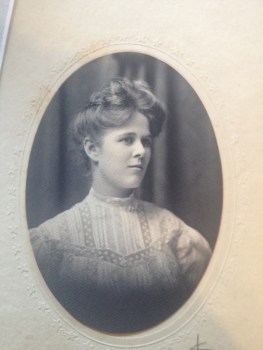 Susan Klein Bonham, daughter of John and Elizabeth Klein, for whom The Corners was built. 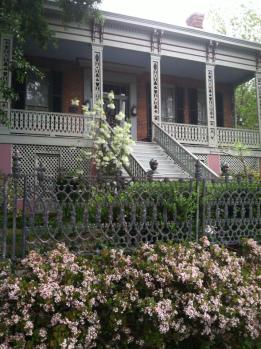 The Corners Mansion Inn is located on the corner of Oak and Klein streets in Vicksburg. 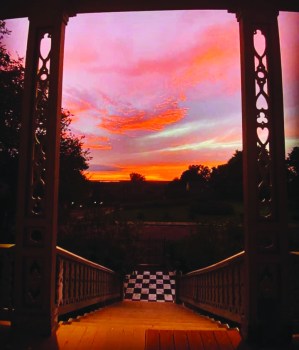 The Corners Mansion Inn is one of the finest remaining examples of pierced columns — an architectural feature unique to Vicksburg. 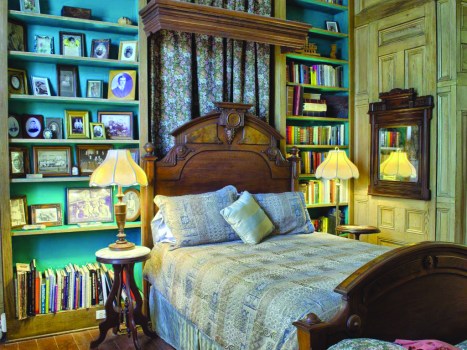 Guests at The Corners can stay in the Library room, located off the main parlor. 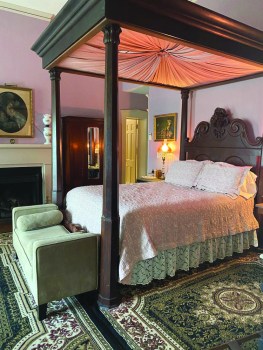 The Klein family was a cornerstone of Vicksburg in its early days, and one of the family’s homes still serves as a reminder of their prominence — and a remnant of sympathies with the Union Army during the Civil War.

Built in 1873 by patriarch John Alexander Klein, The Corners Mansion was one of several homes Klein built for his children and relations along Klein and Oak streets in the Vicksburg Historic District. While Klein’s family home, Cedar Grove, is considered the most stately of homes in the neighborhood, The Corners was constructed for Klein’s daughter, Susan Klein, and her husband Isaac “Ike” Bonham.

Outfitted on the exterior with resplendent colors and woodwork, The Corners’ front porch is bedecked with one of the finest remaining examples of Vicksburg Pierced Columns. The columns feature hearts, spades and clubs, typical of the time period in which the home was constructed.

“The moldings are original, as are the ceiling medallions,” current owner Macy Whitney said. “They’re made from horsehair, plaster and molasses.”

While Vicksburg’s beautiful homes are no secret to residents and visitors alike, what might not be known is the financial foundation for The Corners and other homes built by Klein for his children was based on the family’s ties to the Union Army during the Siege of Vicksburg. Klein’s wife, Elizabeth, was the niece of Gen. William Tecumseh Sherman, who led the charge during the siege in the spring and summer of 1863.

Because of their close relation, the Klein family was allowed to retreat to their home north of Vicksburg, Ballground Plantation, ahead of the invasion. Elizabeth was pregnant with her ninth child at the time, a boy whom she named William Tecumseh Sherman Klein — a tribute to her uncle’s kindness and a reminder of the family’s good fortune during the war.

“She gives birth to the child on Sept. 3, 1863, and they name the baby William Tecumseh Sherman Klein after General Sherman because he was so nice to let them leave the city,” Whitney said. “John and Elizabeth were Union sympathizers, and after the surrender, he built a home like this for each of his children.”

In the Reconstruction period, while many formerly wealthy Southerners fell on hard times, the Union-sympathizing Kleins fared well. Accompanying The Corners was another home built for a Klein child, Bellevue, formerly located on the adjacent corner of Oak and Klein streets. Although it burned in 1970, the servants’ quarters still stand near the site of the home. A third home was built as well, but there is a dispute about its location.

In the 1950s, the Ivy family of Vicksburg restored The Corners to its former glory after the 1953 tornado that struck much of downtown Vicksburg and the surrounding neighborhoods.

After many years as both a private residence and apartments, The Corners has been operated by the Whitney family as a bed and breakfast since 1985. Current owner Whitney, whose parents purchased the home on a whim when they stopped in Vicksburg on a trip from Dallas, Texas to Washington, D.C., said after all these years, she’s still dedicated to preserving the history and hospitality for which the home has become famous.

“I’m passionate about who lived here, the stories that unfolded,” Whitney said. “My parents lived here for 21 years and did all this work, adding the guest rooms. It’s just my passion, and the history it holds for my own family.”