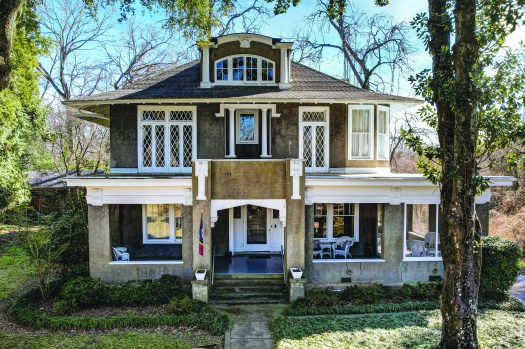 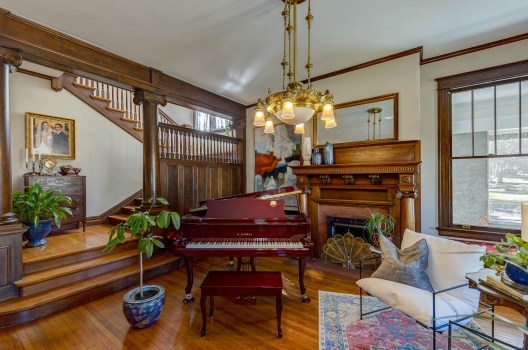 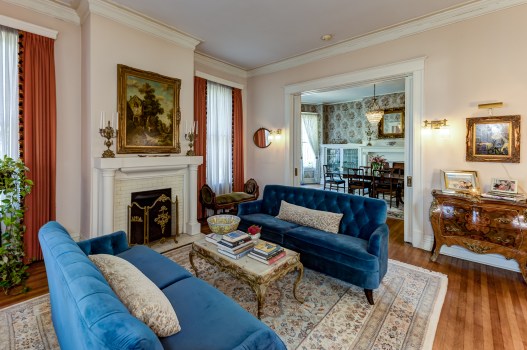 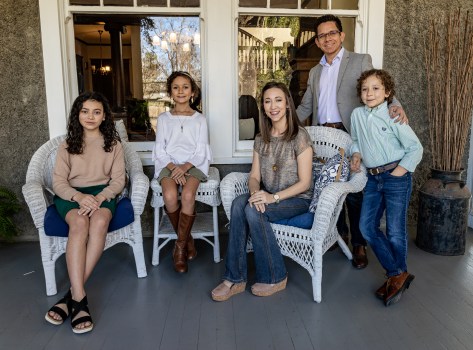 Pablo and Amber Diaz, with their children Maya, Ella and Luca. (Photo by David Rorick) 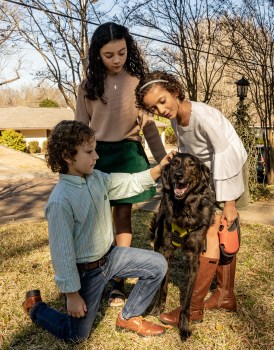 Maya, Ella and Luca Diaz with the family dog. (Photo by David Rorick) 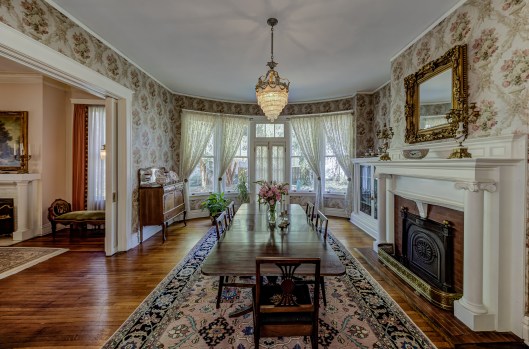 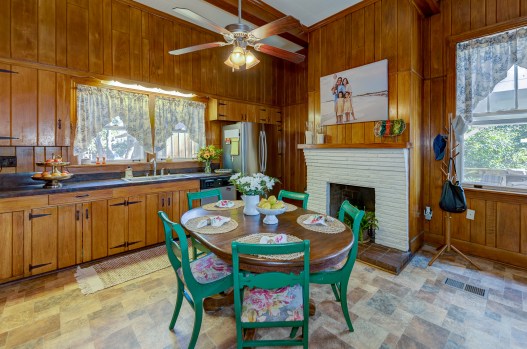 When Pablo and Amber Diaz began looking for a house, their intentions were to downsize.

But then their realtor pulled up to one of the large homes on Chambers Street.

Amber hesitated at going in. The house looked huge. Not to mention it was an older home, something the couple had had no intentions of buying.

But their realtor insisted they just go in and look.

During the tour, Amber spotted an antique brick edging a flower bed in the backyard — and it wasn’t just any old brick. Stamped on it was the city in which it had been made — Laurel, Amber’s childhood hometown.

“We took it as a sign that this was meant to be our home,” Amber said.

Pablo and Amber met while both were students at the University of Southern Mississippi in 2003. Born in San Felipe, a seaside town in Yucatan, Mexico, Pablo came to the United States to study for his Master’s in Economic Development. Amber was pursuing a degree in English, with plans of becoming a teacher.

After marrying in 2005, the couple moved to Florida and then Grenada before coming to Vicksburg in 2017, when Pablo was hired as the Vicksburg Warren Economic Development Partnership President and CEO.

“We were immediately drawn to the crepe myrtle-lined sidewalks, the beautiful old homes, and the family-friendly feel of the neighborhood,” she said.

Built in 1909, the Colonial Mission influenced Revival style home was the second to be built on the property. The first home, built by Edward Durham, had been erected in 1903 but burned to the ground six years later. The house was rebuilt in 1909 in the exact style as its predecessor, except for one addition. Stucco was used to cover the wood siding as a fire retardant.

Upon walking into the home, Amber said she and Pablo were immediately drawn to the home’s architectural features.

“We fell in love with its historic charm, the warmth of the woodwork, the craftsmanship, and the layout of the house,” she said.

Its location was a bonus, since it was not only close to Pablo’s office and to the Vicksburg Catholic School, where their three children, Maya, Ella and Luca, ages 13, 11 and 7, respectively, attend. It also had a playground nearby.

Unlike some of the older homes around Vicksburg, Amber said they did not have to do anything major to the house before moving in. Its former owners, Bobby Weatherly and Dani, his wife, whose family had lived in the house for more than 85 years, had already done a “wonderful” job of restoring and updating the plumbing and electrical.

With antiques and collectibles displayed throughout the home, it is evident Pablo and Amber are drawn to things from the past.

“Pablo and I enjoy shopping for antiques and treasures in antique stores, estate sales, and flea markets,” Amber said.

By filling their home with these special pieces, she said, it has allowed the family to be surrounded with things that bring them joy as well as reminding them of people and places they love — like their vintage coffee table in the front living room from New Orleans.

Amber said the Crescent City is near and dear to them since it is where they got engaged.

Another collectible, which came from Mexico, is an 18th-century wooden crucifix.

Also integrated into the décor of the home are treasured pieces from Pablo’s family.

“A special heirloom of the family’s is a baby Jesus that we display in the Nativity at Christmas. He was given to us by Pablo’s grandmother. The kids really love that He has ‘real’ eyelashes,” Amber said.

“We also have an original wooden saint from the chapel at Pablo’s great-great grandparents’ ranch (in Santo Domingo),” she added. “The ranch with its chapel was an important place to gather, work, and worship in the community.”

Beautiful artwork is also displayed throughout the walls of the home. In Pablo’s “man room” there is a colorful painting displaying the first house he ever lived in.

Sitting center stage of the home’s entry is a beautiful Kawai baby grand piano. All three of the couple’s children take lessons and Amber said Pablo is a natural on the keyboard.

“Everyone in my family is musically talented except me,” Amber laughed.

However, she did say she makes for an excellent audience when the others are performing.

As an active board member of the Vicksburg Foundation for Historic Preservation, Dani Weatherly had worked to maintain the integrity of the home’s past by preserving its beauty.

However, the kitchen was not reflective of the era, and since not, by most people’s standards, it could have used an update.

Ironically, while it is a bit outdated, Amber said it is the family’s favorite room in the house and where they spend most of their time.

“It’s not the grandest room in the house, but it’s bright and so full of charm. It reminds me of my grandmother’s kitchen when I was a child. There is a feeling of warmth and comfort that just envelopes you, especially when it’s cool outside and there’s a fire in the fireplace. Sometimes the kids even roast marshmallows right in the kitchen,” she said. “We’ve spent countless hours around the table doing schoolwork, having family dinners, talking together, and playing board games.”

Since moving into the home, Amber said, the family has immersed themselves in all the fun their neighborhood offers.

“Halloween on Chambers Street is huge, and we like to join in by dressing up as a family. We choose a different theme each year and make coordinating costumes for trick-or-treating in the neighborhood. Afterward, we always warm up with a bowl of homemade chili and let the children hand out candy on the front porch,” she said.

Sometimes referred to as the “wallpaper house” because previous owners had made the effort to preserve a portion of the wallpaper in the home, the Diaz’s home is layered in families’ histories and stories.

The first lady of the house, Emily Durham, was a friend of Varina Howell Davis, wife of Jefferson Davis. Durham  entertained Varina at the home on many occasions.

William McCutchen Raworth, who purchased the home in the 1920’s, was the great-great grandson of Colonel Thomas Marston Green. Green had married Andrew Jackson and Rachel Robards in Natchez in 1791. Green and Jackson remained friends even after the latter was elected President in 1828.

Raworth’s mother, Danella (Ella) Raworth, while traveling abroad, was presented to the Pope in Rome. She also became one of the first licensed National Park Guides after returning to Vicksburg. And, like the Diaz family, Danella enjoyed playing her baby grand piano that sat in the entryway of the home.

The Chambers Street home was sold to James and Pauline Biedenharn in 1954 after the death of Danella’s husband.

In the 1970s Buddy and Marilyn Hardy purchased the home, and then sold it to the Weatherlys in 1991, returning it to descendants who had owned the house for more than 85 years.

The Diaz family will now add their narrative to the home.

“This house is almost like a living entity, and we feel very lucky to be its caretaker. There is so much value in preserving these historic homes, in guarding their beauty and craftsmanship for future generations,” Amber said. “However, that’s not to say that our house isn’t functional. It’s definitely not a museum. We live here, our kids are growing up here, and it’s wonderful. I think that’s the real way to honor these older homes: to love them, live in them, and fill them with pets and children and friends. We hope to be here doing just that for a long, long time.”