Past, Present and Future: Decades of football in the River City 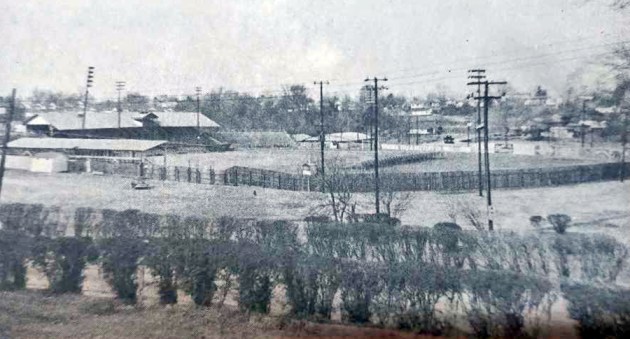 The Vicksburg Hill Billies' baseball stadium at City Park is seen in this photo from the early 20th century. 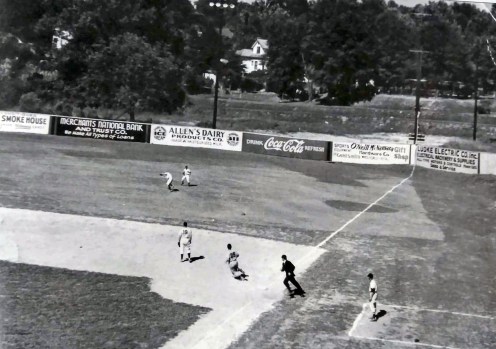 The Vicksburg Billies play a baseball game at City Park in the 1940s.

Memorial Stadium and City Park are seen in the early 1960s. 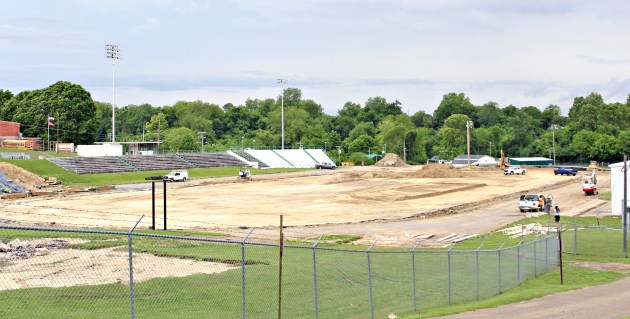 Vicksburg's Memorial Stadium during its most recent renovation in 2019. 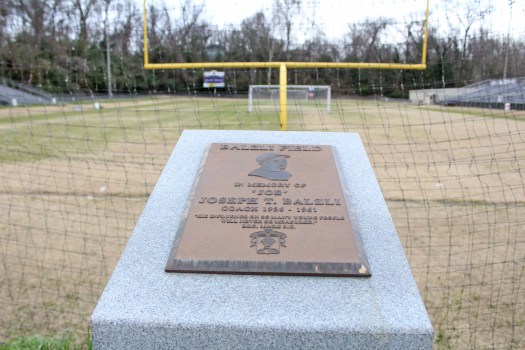 A plaque honoring former St. Aloysius football coach Joe Balzli sits behind one of the end zones at Farrell Stadium.

Vicksburg Memorial Stadium in the 1970s 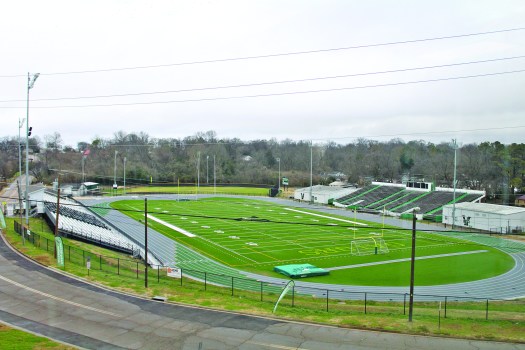 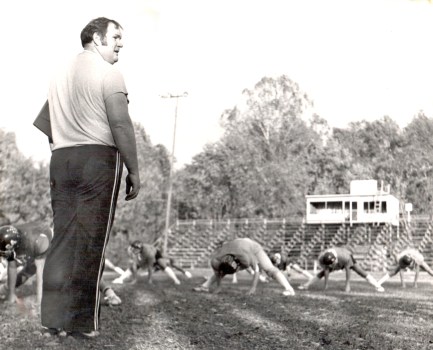 Former St. Aloysius football coach Joe Edwards watches his team warm up before a practice in the 1980s. 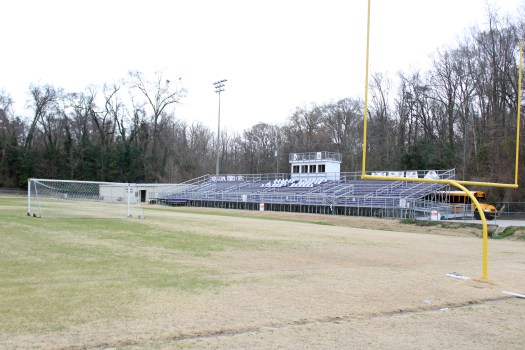 One of the earliest accounts of organized sports in Vicksburg is from 1864, when a group of occupying Union soldiers reportedly played a baseball game.

In the 158 years since then, generations of the city’s residents have played not only baseball but football, basketball, tennis, golf and any number of other sports.

And, for most of that time, two pieces of land have witnessed thousands of the games they’ve played.

The fields that now host St. Aloysius’ and Vicksburg High’s football teams have both been used as sports venues since at least the early 1900s.

St. Aloysius’ field on Grove Street hosted baseball and football games as early as 1890. Then called Beck’s Bottom, it was more of a community space where a number of clubs and groups gathered to play. It was where St. Al played the city’s first high school football games as well, in the first decade of the 20th century.

The “St. Aloysius Athletic Field” hosted games and practices as high school football became more established and organized in Mississippi in the 1920s and 30s. It did not become a full-blown stadium until the 1950s, however.

A Vicksburg resident named James Farrell died in 1937 and bequeathed two houses that he owned on Monroe Street to the Knights of Columbus Council 898, with instructions to build something in his memory.

In the fall of 1953, “something” became St. Al’s football stadium. The 1,600-seat facility was built in less than a month, with the Knights of Columbus donating labor to accomplish the task between home games on Sept. 25 and Oct. 9. It was formally dedicated before a game against Utica on Oct. 22.

“The stadium will be constructed of steel set in concrete, according to Mr. (Warren) Doiron, and will be a permanent structure,” the Vicksburg Post reported at the time.

The stadium was named for Farrell and has been St. Al’s permanent football home ever since. Years later, longtime coach Joe Balzli’s name was added to make the official name Joe Balzli Field at Farrell Stadium.

More modern additions have included a $300,000 upgrade in 2000 that replaced the original wood bleachers with the current metal ones, as well as a new press box; several lighting upgrades — including one in 2021; and a fieldhouse.

Before they moved into their own stadium, the Flashes — and nearly everyone else — played at what is now Vicksburg Memorial Stadium.

The area known as City Park has been Vicksburg’s playground since the early 1900s.

It once served as home to a professional baseball team, the Hill Billies, who were founded in 1902. The Billies were a member of the Class D Cotton States League off and on until the league dissolved in 1955.

Other facilities in the early days of City Park included tennis courts and a swimming pool that has since been abandoned. A new pool was opened in 1996. There was also a race track, although it’s unclear whether it was for humans or horses, and, of course, a football field.

By the 1920s, City Park had become Vicksburg’s primary sports venue. Not only did Vicksburg High and what was then Carr Central play football at City Park, but a number of games between the old county schools were there as well when a bigger crowd was expected. Some college teams even played there. Mississippi College played several games in the early 1930s, and it’s believed LSU and Ole Miss played a game there in 1896, although the exact location of that game is uncertain.

Not long after St. Al built Farrell Stadium, control of City Park was turned over to the school district. The then-new Cooper High School was about to be built — it opened in 1959 and its building is now Vicksburg High School, located atop the hill that overlooks the stadium — and the field at City Park was a natural location for its athletic facilities.

The City Park stadium was rebuilt in 1958. For a cost of $170,000, a new concrete grandstand and press box was built. Its interior is honeycombed with offices, dressing rooms and other amenities.

The renovated stadium was renamed Vicksburg Memorial Stadium to honor the 32 former school district students who had died in World War I, World War II and the Korean War. The first game there was played on Sept. 26, 1958, as Greenville defeated Carr Central 6-0.

Memorial Stadium has continued to serve as one of Vicksburg’s football showcases into the 21st century, and like Farrell Stadium has seen its share of upgrades and modernization.

Three fieldhouses have been added over the years, the last in 2012. The name of the late Jim Stirgus Sr., a longtime county educator, was added in 2017. Adding Stirgus’ name continued a long tradition of periodically renaming the field. At various times it has been called Johnson Field, City Park, Memorial Stadium, and now Jim Stirgus Sr. Field at Vicksburg Memorial Stadium.

Most recently the field underwent a multi-million dollar overhaul that changed the original grass field to artificial turf, put in new lights, replaced the aging visitors’ stands and added other new amenities.

There are long-term plans to replace the 1958 bleachers as well. For now, though, they still stand, with their decades of dirt and history providing a tangible link between the past, present and future.