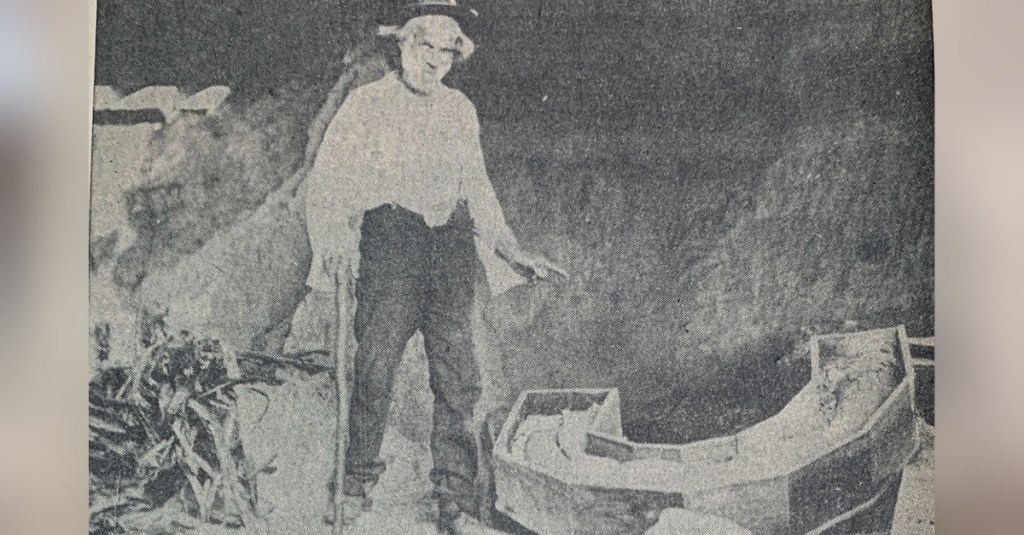 Washington Green stands next to part of the mastodon skeleton he discovered while digging on his property in Vicksburg. (Photo courtesy of the Old Courthouse Museum)

Information for this story came from an article written by Eva W. Davis for the Vicksburg Sunday Post in 1983 and a copy of Washington E. Green’s obituary as it had appeared in the Vicksburg Evening Post on Sept. 23, 1889.

Washington. E. Green had had enough — what with the war, his financial losses and just the world in general.

Therefore, he set out to find a spot where he wouldn’t have to deal with anything other than, well, Washington E. Green.

Born in 1802 in Adams County, Green moved to Vicksburg, where he became a successful planter. His farm was located on Hall’s Ferry Road near the current location of the U.S. Army Engineer Development and Research Center, and by 1860 the value of his real estate was $35,000. Today, this would be over $1 million.

In addition to his real estate holdings, Green also had slaves valued at $70,000.

During the prosperous years, Green was involved in the community, serving on the Board of Police or as it’s called today, the Board of Supervisors. It was during his tenure that the contract was signed to build the Old Courthouse.

But when the Civil War broke out, Green, as Eva W. Davis wrote in her story, “Became a destitute old man.”

It was then he left the creature comforts of home, found a place on his property and began to dig.

Green, as he told a New Orleans Times reporter, was digging himself a hole to live in.

It was this digging that brought the reporter out to see Green.

In 1869, Vicksburg had a “gully-washer” of a rainstorm and combined with Green tunneling out a place for himself to live, “a monster,” as he called it, was unearthed.

This so-called monster turned out to be part of a mastodon skeleton, which was found in a ravine on the edge of one of Green’s fields. The first bit of the skeleton he saw was a giant tooth described as 8 or 9 inches in diameter.

Green then discovered the prehistoric pachyderm’s tusk, which measured more than 6 feet long.

After his discovery, Green obviously began telling folks about his find, but there were some who were skeptical — namely the editor of the Vicksburg Times.

Making fun of Green, he (the editor) said, “The monster is reported as about the size of the steamer R.E. Lee, or of the Court House and Masonic Building combined with a tail that could with one flop uplift Vicksburg from its everlasting hills and open a navigable channel from the Mississippi to the Big Black.”

The editor added that his ribs could be used as “rafters for the State House in Jackson” and that its teeth were big enough for chopping blocks.

Obviously, there were a few feathers lying around on the ground after this editor had to eat crow, because after he went to see the “monster” for himself, he apologized, while also reporting to newspaper readers that it was well worth their time to go and see Green’s discovery.

Green had been offered $200 for his find, but still a businessman at heart, he built a shed over the animal and a fence around it and charged those who came to see the wooly mammoth.

Green was 87 at the time of his death, which was caused by a blood-poisoning he developed after having his hand amputated due to cancer.  He died at his daughter’s home, leaving his wife, son, daughter and several grandchildren.

Green spent many years living as a hermit, and in his conversation with the New Orleans Times reporter, when asked why, Green said, “Well, some three years ago I thought I had enough of gossip of friends and of the world in general and I come out here to dig me out a hole to live in. Some people laughed at me and called me crazy. But what is the world after all? Nothing but a big hole after all, with this difference: there’s more dirt and filth in the bottom of it than you’ll find here.”