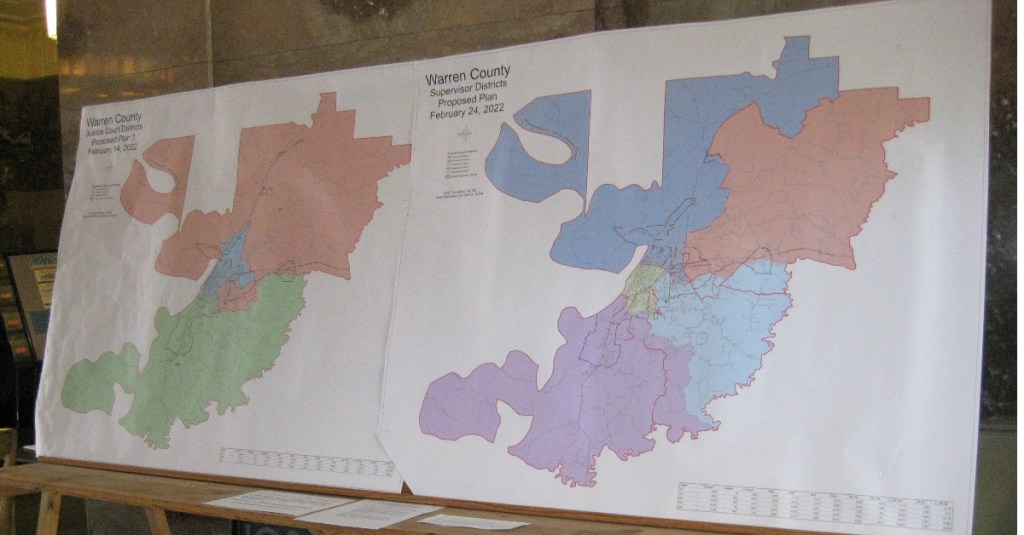 The proposed redistricting map of Warren County was on display at the Warren County Courthouse. (Photo by John Surratt | The Vicksburg Post)

The Warren County Board of Supervisors held a public hearing on Monday to receive comments from residents regarding the county’s proposed redistricting map.

Morrow, citing 2020 Census data, said the NAACP is proposing one of the remaining districts in the county be redrawn to represent a 50-50 split between white and Black voters over age 18.

“Our current overall ‘other minority’ population in the county is 2,179 citizens.”

The 2020 Census reflects that Warren County has 291 more Black citizens than white citizens, making it a majority-Black county. However, Morrow said, the Board of Supervisors has historically been majority-white since its inception in 1809.

In comparing the previous redistricting map to the current proposed map, Morrow pointed out the ways district lines can negatively impact citizens.

“As of today, based on the Warren County 2020 Census population and district lines as they currently stand, Warren County is a majority Black county, with Blacks holding the majority in districts 2, 3 and 4,” she said. “Our NAACP Vicksburg Branch members understand how poorly drawn, diluted and packed redistricting lines can impact them in the areas of criminal justice, economics, education, health and voting lines.”

To better reflect demographic representation among the county’s five districts, Morrow said the NAACP Vicksburg Branch is formally asking for district lines to be redrawn.

“Today, the opportunity presents itself, with the 2022 redistricting process, that we could have two majority-Black districts, two majority-white districts and one 50-50 district,” she said in her address to the board. “The members of the NAACP Vicksburg Branch do not want anyone shut out of the process. We are encouraging and seeking more equitable rules of engagement to include all citizens.”

The NAACP Vicksburg Branch’s requests for redistricting are:

District 3 Supervisor Shawn Jackson responded to Morrow’s comments, stating that she and the board prioritized the simplification and consolidation of districts, primarily District 3, which was previously not contiguous.

“One of the initial proposals of the current map we have today is one that I set out to do initially, in order to fix the severe gerrymandering that I felt was going on in District 3,” Jackson said. “That was, having streets where one side was Black, the other side was white, that kind of thing.

“The original map, as it stands, for District 3 is, I think, a poster child for gerrymandering — not nationwide, but worldwide. And I think our community is better than that,” she added. “It was non-contiguous and it was definitely drawn to take care of what should’ve come about naturally, and that is allowing for a majority-minority district if the Census yields it.”

Board of Supervisors President and District 5 Supervisor Kelle Barfield also answered questions presented by Morrow on behalf of the NAACP Vicksburg Branch. One concern presented was that the public hearing was scheduled for 10 a.m. on Monday when many voters were either working or at school, Morrow said.

“Quite honestly, when we had the discussion, a public hearing is not a requirement. It is our effort to make the redistricting as accessible as possible, with either email comments, inviting one-on-one feedback,” Barfield said. “When we set the date of the meeting, we simply acknowledged that we’d all be here for our regular meeting. There was no deliberate intent to include or exclude anybody’s voice in the process.”

The Board of Supervisors decided to discuss feedback from the public hearing on redistricting at its working session on March 28.