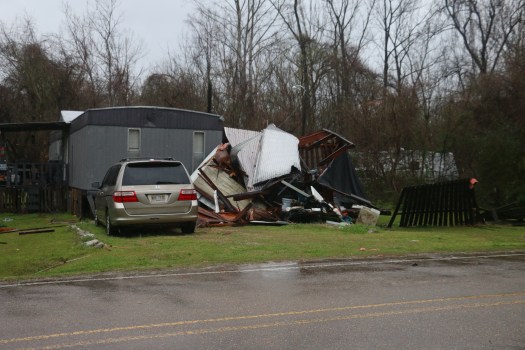 A shed next to a mobile home collapsed due to severe weather on Tuesday following reports of a tornado in the Redwood area. The mobile home is located near Redwood Elementary School. (Photo by Terri Cowart Frazier | The Vicksburg Post) 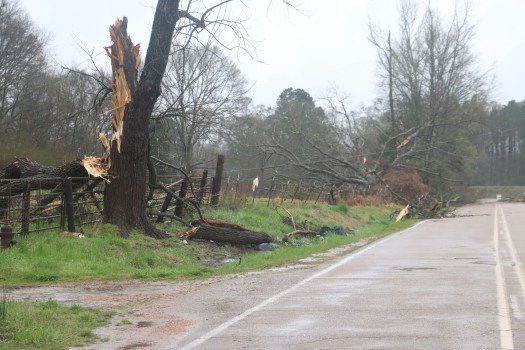 A tree fell on Duncan Road in the Bovina Community during Tuesday’s severe thunderstorms. Volunteers and Warren County emergency personnel were able to clear the tree off the roadway. (Photo by Terri Cowart Frazier | The Vicksburg Post)

A band of severe thunderstorms moving east across the Southern United States came through Warren County on Tuesday, leading to storm damage and at least four tornadoes in the area.

No more than 2,000 customers were out of power at once throughout the day, according to Entergy’s power outage tracker. Merit Health River Region also experienced a power outage of approximately 30 minutes.

“During the outage, our backup generators allowed for air conditioning and emergency power to remain on until our power was restored,” a statement from the hospital read. “We are grateful for our experienced team that works hard to care for the patients in our community in times such as this.”

According to John Elfer, director of the Warren County Emergency Management Agency, four tornadoes were reported within the county, none of which could be confirmed to have touched down.

Two of the reported tornadoes started around Eagle Lake, then crossed the river into the Redwood area. One tornado was reported in the Bovina area, and another was reported near Valley Park.

A mobile home, which was unoccupied at the time, had a tree fall through it. Additional reports of damage are anticipated throughout the remainder of the week.

Residents of Warren County may self-report damage caused by the storm on the Warren County Emergency Management Agency’s Facebook page.