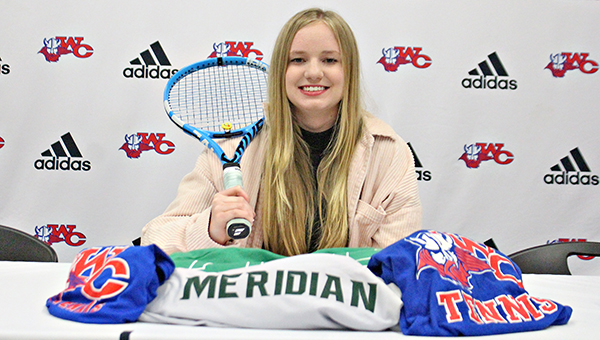 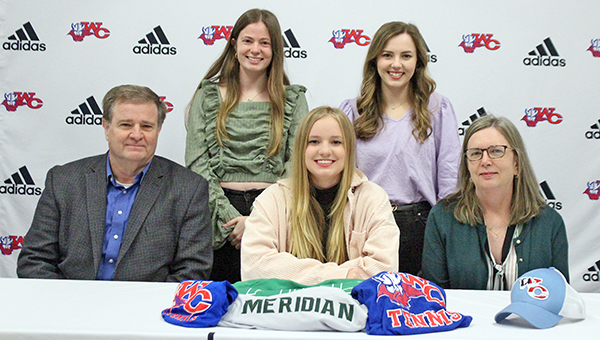 Over the past couple of years, Cali Davis decided to give up on running cross country and playing volleyball to focus on tennis.

It turned out to be a wise decision.

Davis has emerged as a team leader in her senior season with Warren Central’s tennis team. Even better, she’ll get the chance to continue her career after signing with Meridian Community College recently.

“Ever since I started playing tennis I’ve been wanting to play college tennis. I even quit all my other sports so I would have a chance to play tennis. So it’s really exciting,” Davis said. “I’ve played it a lot longer, and my sister played it and she got offered. So I wanted to try and get offered too, and I thought it would be fun because I like tennis way better.”

Davis started playing tennis in fourth grade, but didn’t get serious about the game until a few years later. When she moved up to Warren Central’s high school roster as a freshman, she said she started to notice some real improvement.

Davis paid her dues and bided her time on a loaded roster — she is the eighth Warren Central player in the last three years to sign with a junior college — and has finally gotten her time to shine as a junior and senior.

Davis has played both doubles and singles. More importantly, on a team suddenly loaded with very young players, she’s been a valuable “coach on the court,” Warren Central coach Steve Summers said.

“She’s surrounded by seventh- and eighth-graders. Instead of a haughty attitude, or senioritis, she’s made her way, put in her work and signed with a college,” Summers said. “She’s still the first one to practice. She’s hanging out after practice to hit not just with the young ladies but the guys, too. She’s everything you want to see in a senior.”

Davis said Meridian started recruiting her a while ago. She toured the school and talked with Madison Embry, a former Warren Central standout who is current a freshman with Meridian’s tennis team.

Davis said having a familiar face to sell her on the program helped, but decided to sign with Meridian because of the potential it offered for personal as well as athletic growth.

“The coach gives the freshmen a certain book. He says he doesn’t want players to leave being all about tennis. He wants us to leave with better morals and a better person,” Davis said. “I felt like that was somewhere I would come out of as a better person and player.”

And now, as her high school career winds down, she’ll get the opportunity to do both.

“It seems kind of unreal that all of the people are looking at me, and it’s exciting at the same time that all of these people are wanting me on their team. It makes me feel good,” Davis said. “I’m really excited to see where it goes.”