AFTER THE STORM: Vicksburg Warren School District responds to handling of severe storm

Following a severe weather incident on Tuesday that resulted in the release of public school students as a tornado warning was issued, Vicksburg Warren School District Superintendent Chad Shealy said there’s one thing to make clear.

“We made the best decision we had with the information we had at the time.”

Beginning Monday afternoon, Warren County Emergency Management Coordinator John Elfer’s office was contacted as the district made plans to weather the storm coming Tuesday — both literally and figuratively. Initial projections for the storm, according to Shealy and verified by reports from the National Weather Service in Jackson at the time, showed the initial wave of the storm hitting in the early morning hours. Conversations began regarding a delayed start to the school day.

In a matter of hours, projections shifted, showing the worst of Tuesday’s severe weather arriving in Warren County between noon and 3 p.m., with a margin for error. At 7:35 a.m. Tuesday, Shealy said it was the last opportunity to change course. It was decided that VWSD students would have a normal school day, with a pause if the weather got too bad.

“At that point, we didn’t see a reason to do that,” Shealy said. “We expected it to be the middle of the day which would give us the opportunity to get students at school, have school, deal with any emergency situations that come up during the day.”

A graphic showing timelines for severe weather on Tuesday was sent from Elfer to Shealy, Dr. Cedric Magee and other school district officials. The timeline, pictured below in red, showed severe weather beginning at 11 a.m. and peaking between 2 and 4 p.m. 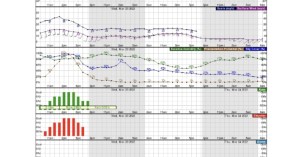 So, a decision was made to keep students in school for the full day.

“Somewhere around 9 o’clock, 10:30, we got a call from (Elfer) saying we’ve had a change in trajectory,” Shealy said. “This put (the weather) right at dismissal. That became a very difficult factor for us. You’re dealing with a transportation issue and a feeding issue for 7,000 students.

“At that point, I said, ‘Get (Elfer) over here.’ He came in and I had the district’s team here, and we needed to see whether it was going to change the original decision that we made.”

At this time, Shealy said based on the information he’d received, it seemed as though the district had a 2 1/2-hour window to get students home, get bus drivers to safety and allow staff members to gather their things and leave school.

Shealy, Dr. Cedric Magee, the Warren County Emergency Management Agency, school board members and school administrators also examined the actions of other school districts in the area that had made a decision to either close for the day or implement early dismissal procedures.

“We had a narrow time frame to make the decision to either transport safely or potentially be here until 6 or 7 o’clock, and deal with power outages and things like that,” he said. “Again, you’d have to dig out a crystal ball or be a prophet to understand the magnitude of what happened. We do know we have a history of power outages, of strong storms coming through. We’re very rural in a lot of areas, so we have trees across the road.”

At this point, he said, they thought there was still time. However, the weather is often predictable.

“I think one of the things to understand is, I’m not just the superintendent, I’m a daddy. My child was in those buildings and my wife was in the same position as a lot of the parents,” Shealy said. “I would never have done anything to intentionally harm a soul.

“I don’t know how many minutes, but it wasn’t very many of them, that (Elfer) called me back and said, ‘We’ve got a tornado warning,'” he added. “Literally, it felt like 10 seconds. In the midst of all this, we’re communicating with the mayor, the sheriff, the police department, all school board members.”

From there, the school board followed its policy regarding weather issues. By policy, the superintendent must consult with Emergency Management, and present the information gathered to the school board president.

“Before a decision to shut down, I call my board president with all the information we have and I say, ‘This is our plan; are we good with that?’ There was an agreement there and the decision was made,” he said.

Then, a tornado warning was issued for Warren County.

“Once everything started happening, fortunately, we only had two buses on the road. Of those, one was a Redwood bus, for which we secured a shelter (for the children) at a nearby church,” he said. “The other was a Bovina bus that we put at the district’s transportation department building.”

Another logistics issue presented itself in the number of parents outside schools, waiting to pick up their children in the midst of the storm. As the tornado neared Redwood Elementary School, Shealy said every student in the district that hadn’t been picked up by parents was in a school building.

Approximately 30 minutes after the warnings ended in the 1 p.m. hour on Tuesday, the district resumed its early dismissal process.

“The problem complicated, after the fact, when we had multiple schools with power outages, we had students who’d left for the day,” Shealy said. “The regular operation of school was disrupted to the point that it couldn’t continue, due to the fact that we did have parents there — a very defendable fact.”

Buses were not allowed to leave until it was confirmed with Elfer and Sheriff Martin Pace that roadways were clear, especially in rural areas of the county.

“That’s the value I have in them,” Shealy said of Elfer and Pace. “No one else in this whole county will communicate at 2 or 3 in the morning. (Elfer) has been a champ and has always been there for us. Everyone else deals with it after the fact.

Still, Shealy admitted hindsight was 20/20, and there were some things he might’ve done differently had he known what he now knows about the storm Tuesday.

“I think every event that has occurred since I’ve been here, we always do a reflective process. How can we make this better, cleaner?” he said. “The problem with pontification is, there could’ve been a lot of things that could’ve gone a lot differently. There are horrible circumstances that could have, and have, occurred at school buildings full of children.

“I really don’t know what else we could’ve done.”

To address some rumors and accusations Shealy said he’s seen, the superintendent said his goal is always to keep students in school as long as it is safe to do so. He also had principals move up lunchtimes during the day on Tuesday, to ensure food-insecure students would get at least one meal that day.

“It’s always my primary response — can we keep kids in school, safely and on a regular schedule? Always, 100 percent, that’s my default,” he said. “Until a circumstance gets to the point where that’s not possible, that’s where it changes.”

Shealy also said the rumor that the district receives federal funding based on each day of school that is attended — and that his decisions on Tuesday were affected by funding at all — is “utter nonsense.”

“All that’s nonsense. What we have is a state law for a required amount of days. In an emergency situation, we have multiple avenues and the laws are pretty clear around what those are,” he said. “I’ve never made a safety decision based on money. It’s just as simple to change a calendar day for a day we already have off, or add it to the end of the year. There are a lot of variables.”

State law requires students to attend school for 63 percent of the day in order to be counted as a full day of school and not be required to make up the day later. But Shealy said that determination is “an afterthought,” and irrelevant in the moment of the decision.

“No, we did not hold anyone anywhere to get to a number to make some federal nothing,” he said.

The bottom line, after days of reflection on the issues, he said, is that the information changed on a minute-by-minute basis and safety was the top priority over the course of the storm.

“It’s always our priority to keep people safe. There has never been a time and will never be a time where we’ve intentionally made a decision to keep a child in harm’s way,” he said. “When that information changed, our decision changed. If I could go back in time and do it all over again, maybe we’d have done what Claiborne County did, or we’d have battened down the hatches and said, ‘Kids are secure at school, we’re going to ride it out.’ Either way, I just don’t want anyone to think that anybody intentionally made a decision to put a child in harm’s way, because that wasn’t the intent.”