HERO OF THE WEEK: Pinkins fought for the country, now fighting for justice 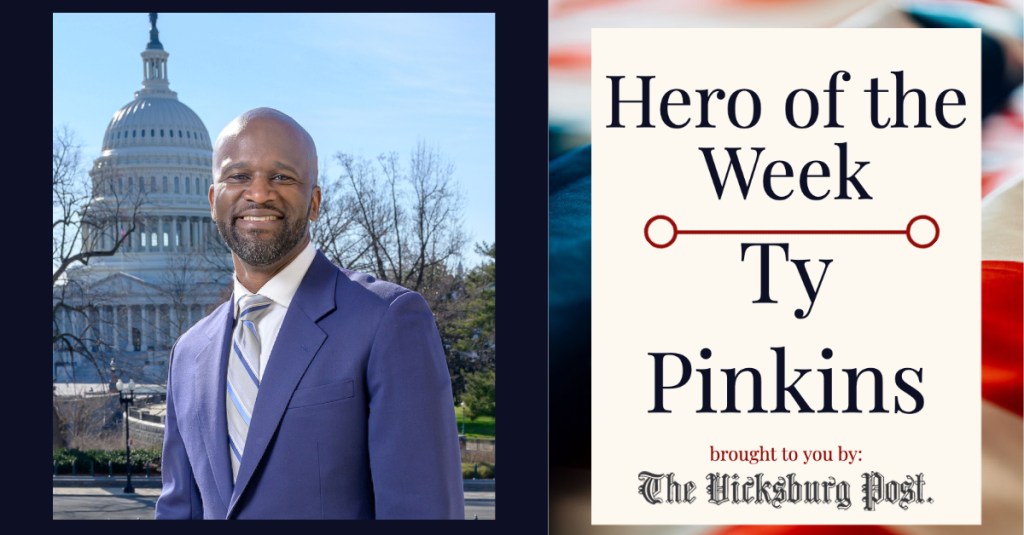 This week’s Vicksburg Post Hero of the Week is Chief Warrant Officer Three (R) Ty Pinkins. Pinkins was born in Rolling Fork, Miss., and graduated from the University of Maryland University College with a bachelor’s degree in Political Science. He earned his Juris Doctorate as well as his LL.M. (Master of Laws) in National Security Law from the Georgetown University Law Center. He began his military career by enlisting in the Army on June 24, 1996, and subsequently attended basic training at Fort Jackson, S.C. followed by Advanced Individual Training at Fort Gordon, Ga. as a Signal Systems Support Specialist (31U).

I served in the Army from 1996 through 2017. Actually, my career began right here in Vicksburg when I walked into a recruiting station at Pemberton Square mall.

255A: Information Systems Technician: I supervised and managed the systems, services and personnel in operation centers that ensured the efficient and effective application of electronic satellite and electronic systems as an element of combat power. As an Information Services Technician, I planned, installed, administered, managed, maintained, operated, integrated systems to include Mission Command Systems and various automation information systems enabling voice, video, data and imagery processing. I managed the training of personnel on the planning, installation, administration, management, maintenance, operation, integration, servicing, securing and troubleshooting of information systems and services. I helped develop policy recommendations and provide technical guidance and advice to commanders and staffs on the management and operation of Army, joint, intergovernmental, interagency and multinational information systems and services.

I served on active duty for 21 years. Thirteen of those years were served in Germany; I served two years in Asia; I was deployed on three different occasions to Iraq, totaling three years and during my first tour I was awarded the Bronze Star. Three years of my career where served at various posts in the United States. My career culminated with me serving as a Communications Aide to the President of the United States.

Before joining the Army, I did not anticipate traveling to so many different places. However, after visiting so many countries and being exposed to so many different cultures, my worldview and perception of others outside our country were broadened far beyond what I imagined as a child. Having the opportunity to walk the streets of Frankfurt, Germany; sail across the East China sea to Tonaki Jima; snorkeling off the coast of Okinawa are experiences I will never forget.

What were the reasons why you joined the military?

I joined because I wanted to serve my country. Additionally, I wanted to earn my degree. The Army offered to pay for my degree so I thought, “Why not kill two birds with one stone?” Initially, I intended to serve for four years. However, I enjoyed being in the military so much that what was initially supposed to be four years, turned into a career that lasted more than two decades and spanned five continents to include North America, South America, Africa, Europe and Asia.

My experiences in the military have a significant effect on my life today. The leadership skills I gained from serving continue to play a role in how I give back to my community today. For example, I founded a nonprofit called the Pyramid Project (www.pyramidproject.org) which benefits youth not only right here in the Mississippi Delta but specifically in our community right here in Vicksburg. There are students here in Warren County who, through the Pyramid Project, have found themselves whisked off to Washington, DC where they had the opportunity to visit the White House, tour major universities such as Georgetown, Howard, and American University in our nation’s capital; visit the elected officials on Capitol Hill; tour the Pentagon; and even walk the halls of the White House. So, the leadership, organizational, and communication skills I learned from the military are skills that I continue to employ today right here in Warren Vicksburg, Warren County and the broader Mississippi Delta as a way to serve in communities just like the communities that gave me so much when I was growing, and molded me into the person I am today.