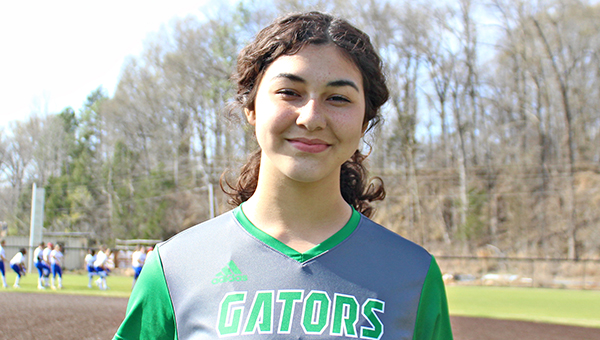 Vicksburg High softball player Lexi Kistler tripled and drove in two runs, and also had nine strikeouts in a three-inning no-hitter to lead the Missy Gators to a 19-0 win over Jim Hill on Thursday.

The Vicksburg Missy Gators still did not get a lot of hits in their latest outing. This time, they didn’t get the chance — nor did they need to.

The Missy Gators drew 18 walks — 15 of them in the first inning — and complemented them with three extra base hits and a single to wipe out Jim Hill 19-0 in a softball game Thursday.

Kistler also pitched a three-inning, run-rule shortened no-hitter. She recorded all nine outs via strikeout, and the only blemish on her ledger was a hit batter in the first inning.

The victory was a pivotal one for the Missy Gators (2-9, 1-0 MHSAA Region 4-5A). They and Jim Hill are the only teams in Region 4-5A, so Thursday’s win in the first of two meetings this season all but wrapped up the region championship and a first-round bye in the Class 5A playoffs.

Vicksburg and Jim Hill will play again April 14 in Jackson.

Pearl 4, Warren Central 3
Pearl used three errors in the bottom of the seventh inning, including the last with two outs, to steal a walk-off win against Warren Central in the MHSAA Region 6-6A opener for both teams.

Three consecutive hits, including an RBI single by Sarah Cameron Fancher and an RBI double by Jenn Smith, brought in two runs in the sixth inning. Two more hits and an error in the seventh got the tying run home.

The Lady Vikes misplayed three balls in the bottom of the seventh, however, to allow Pearl (9-6, 1-0) to salvage the victory.
Smith finished 2-for-3 with one RBI for Warren Central, and Lola Crozier also had two hits.

Annalyn Nevels and Abby Morgan combined for six strikeouts in 6 2/3 innings, and allowed a total of three hits.

Warren Central had a four-game winning streak snapped. It will play in the Vicksburg High tournament this weekend, and then has another region game Tuesday at Northwest Rankin, at 6:15 p.m.