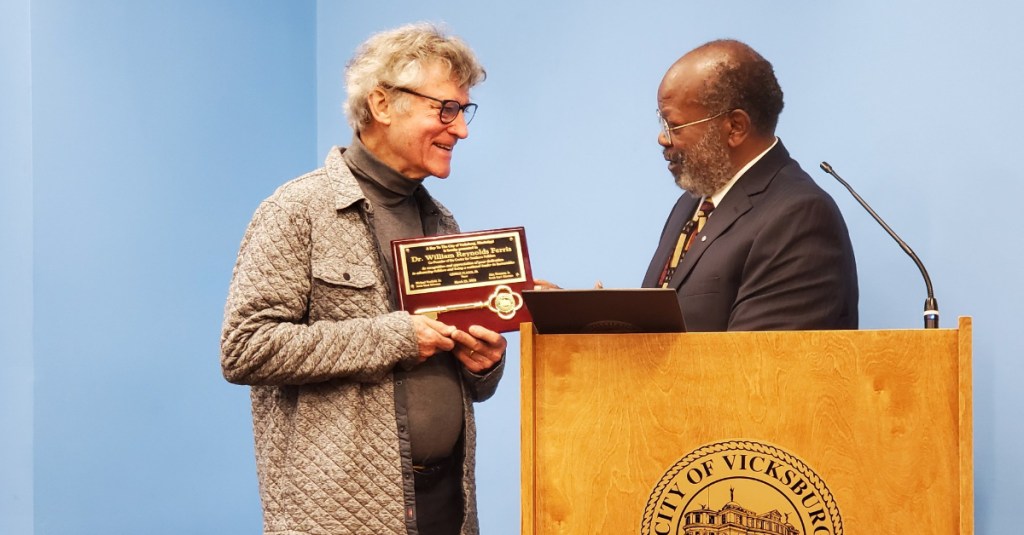 Former Vicksburg Mayor Robert Walker, right, presents the Key to the City to Dr. William Ferris on Friday during the Board of Mayor and Aldermen Meeting. (Photo by John Surratt | The Vicksburg Post)

The Vicksburg Board of Mayor and Aldermen took a time out at the start of its meeting to honor one of Vicksburg’s own, Dr. William Reynolds Ferris.

Ferris, who was honored Friday by the Mississippi Humanities Council for his work in documenting Mississippi’s culture, history and folklore, was honored by the board with a key to the city and proclamation setting Friday as Dr. William Reynolds Ferris Day in Vicksburg.

“It’s probably my highest honor to be here at this occasion,” Mayor George Flaggs Jr. said. “We’re recognizing a most distinguished person; a hometown hero.”

Former Vicksburg Mayor Robert Walker, who said he met Ferris when both men were teaching at then-Jackson State College, said Ferris “comes from a long line of humble yet distinguished contributors to the making of this city and this state; his record of accomplishments is too extensive to cite on this occasion.”

Walker said Ferris has single-handedly elevated the humanities and the human spirit through his precedent-setting work and establishing sites for studying southern culture.

“He is a credit to our city, to Mississippi, to America and humanity, wherever it is,” Walker said. “He represents the very best that is created in the image of our Creator.”

“There is no greater honor than being recognized at home where people truly know you and I cannot tell you how deeply moved and how proud I am to receive this recognition,” Ferris said. “It’s a double pleasure to be here.”

Ferris also thanked the board and recalled teachers and people in the community who helped shape his life growing up.

A former chairman of the National Endowment for the Humanities, Ferris is a writer, folklorist and documentarian who has written or edited 10 books about Mississippi culture and history.

Ferris was a founding director of the Center for the Study of Southern Culture at the University of Mississippi. In 2018 he produced the Grammy Award-winning box set “Voices of Mississippi” containing his field recordings and documentary films. He is presently the Joel R. Williamson Eminent Professor of History Emeritus at the University of North Carolina at Chapel Hill. He served as chairman of the NEH from 1997 to 2001.