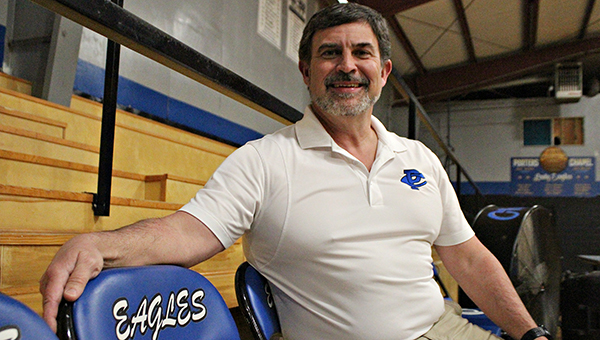 Porter's Chapel Academy's Walter Hallberg is the 2022 Vicksburg Post basketball Coach of the Year. Hallberg led the Eagles to a third-place finish in MAIS Class 3A and their first appearance in the MAIS Overall Tournament since 2013. (Ernest Bowker/The Vicksburg Post)

Heading into the 2021-22 season, his second as Porter’s Chapel Academy’s boys basketball coach, Walter Hallberg had modest goals for his team.

Get out of the district tournament for the first time in several years. Finish with a winning record. Take another step forward as a program.

It quickly became apparent that he and the rest of the Eagles would have to adjust their expectations.

“At the start of the year, my goal was to get out of the district tournament which we hadn’t done in six or eight years. Halfway through the year, we got to Christmas and had only lost to Greenville Christian,” Hallberg said. “I said to the guys that we’re going to be the No. 2 seed and we’re already there, so let’s change that goal to let’s get to the state tournament. Then we hit that goal and it was, ‘Hey, let’s do something nobody has done in nine years.’”

With their goals recalibrated, the Eagles again exceeded all expectations. They got to the state tournament. They got to the MAIS Overall Tournament. They finished with a 22-14 record, their best since winning the Class A championship in 2013.
For turning around a program that had been stuck in neutral for nearly a decade, Hallberg was selected as the 2022 Vicksburg Post basketball Coach of the Year.

“It’s a big accomplishment. I owe more of it to them than to me,” Hallberg said, referring to his players. “I gave them the stuff they needed to do to get better. They’re the ones that had to put in the work to do it, and here we are.”

Hallberg said PCA’s turnaround began last season, with the addition of three key players — Chris Taylor, Nick Williams and Lawson Selby. All three averaged in double figures in scoring this season and were selected to the Vicksburg Post’s All-County team. Taylor is the boys Player of the Year.

Unlike most athletes at PCA, Taylor, Williams and Selby only play one sport. Hallberg said that allowed them to put in some extra work last summer and form a strong core to build around.

Besides being talented players, the trio blended with their teammates to create a remarkable and rare bit of perfect chemistry and complementary skills.

Taylor, Lawson and Selby provided most of the scoring. Role players like Willie Rogers and Tyler Washington did the dirty work of rebounding and defending inside. Others like Taylor LaBarre came off the bench to give a spark and scoring depth.

By mid-December, it was obvious that PCA was heading toward a good season. It was just a question of how good it could get. The program had not won a game beyond the district tournament since 2013, but it went into that first phase of the MAIS Class 3A playoffs with a berth in the South State tournament in hand.

The trip to Overall capped a remarkable turnaround. Besides the postseason success, the Eagles nearly doubled last season’s win total.

“Everybody did what they needed to do for us to get better,” Hallberg said. “Everybody was much better this year than they were last year, from the best players to the role players.”

Hallberg is already setting goals for next season. The Eagles will take some heavy losses from graduation — Taylor, Williams, Washington and Rogers are among this year’s seniors — but Selby will be back. Some promising junior high players and a couple of transfers should flesh out the ranks.

With a taste of success and some positive momentum, Hallberg said, the biggest goal for next season is to ensure this year’s run was not a one-off.

“Last year’s ninth-grade class was really good. This year’s ninth-grade class is really good. Obviously we’re losing a lot, but we’ve already got some interest from people wanting to transfer in from other schools,” Hallberg said. “We have to follow that up and see how it goes. We’ve got a good group coming back next year. I don’t plan on taking a step back at all. I’m hoping 20-win seasons are the norm now and not once every 10 years.”