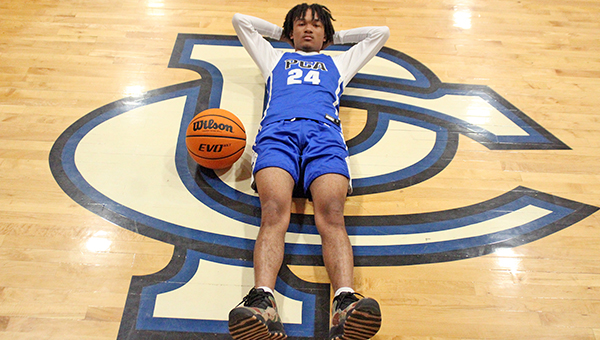 Porter's Chapel Academy's Chris Taylor is the 2022 Vicksburg Post boys basketball Player of the Year. The senior guard averaged 18.7 points per game this season, and scored more than 1,000 points over the past two years for PCA. (Ernest Bowker/The Vicksburg Post)

Chris Taylor vividly recalls the moment his passion for basketball was rekindled.

Two years ago he was a junior varsity washout at Vicksburg High School. The 5-foot-8 guard wasn’t able to make the varsity team and was down in the dumps. His mother, Angela Williams, took him to Memphis to see an NBA game between the Grizzlies and Orlando Magic.

Watching the world’s best players do their thing sparked something inside Taylor.

“I really thought my career was over with when I left Vicksburg. But my mom never let me quit. She took me to an NBA game and that brought my spirits all the way up. I worked out hard for four months and that’s when I got the call to come over here,” he said.

“Over here” was across town, to a fresh start at Porter’s Chapel Academy. The guard who was undersized for the MHSAA Class 5A level thrived in the MAIS. He had a 50-point game and made The Vicksburg Post’s All-County team as a junior.

This season he averaged 18.7 points per game and led the Eagles to the MAIS Overall Tournament for the first time since 2013. As the team’s engine and leading scorer, Taylor was selected as the 2022 Vicksburg Post boys basketball Player of the Year.

“First I want to thank God. God blessed me in so many ways throughout my whole career. He put me through tough times, but you know what they say — God don’t put you through nothing you can’t handle,” Taylor said. “And then I want to thank my mom. She sacrfificed so much for me, sending me to this school and spending money and whatever she had to do, she did it. I want to thank my family and friends for supporting me.”

Taylor said some of his struggles at Vicksburg stemmed from trying to break onto a talented roster at a solid MHSAA Class 5A program. His height was an issue, as was being a young player on what was at the time a roster full of upperclassmen.
Transferring to Porter’s Chapel, he said, allowed him to break through the logjam.

“When I was at Vicksburg, I really didn’t get the opportunity to play. I was trying to get myself a different outlook, a different pathway, a different way out,” he said. “When I got the call from PCA I came and got in a little workout and it went good. And it’s been good ever since.”

Taylor flourished immediately with his new team, averaging 21.8 points per game as a junior to lead the Eagles.

He also took on a different — and perhaps even more important — role as a recruiter. He convinced his AAU teammates Nick Williams and Lawson Selby to transfer to PCA as well, and the three of them became a formidable core for the 2021-22 team by each averaging in double figures in scoring.

“(Taylor) could score off the dribble, he can create his own shot, he can get to the rim and finish. It was definitely good to get him last year,” PCA coach Walter Hallberg said. “And without him coming, we may never get Lawson or Nick. They know each other through AAU. People knew what we had coming back, and he was the reason some of the transfers wanted to come.”

In two seasons at PCA, Taylor scored more than 1,000 points. He was an MAIS All-Star and the District 3-3A Offensive MVP this season. His biggest accomplishment, though, was pushing PCA’s program to a new level.

Ever since Porter’s Chapel won the 2013 MAIS Class A championship it had been stuck in mediocrity. It had not won a game beyond the district tournament phase of the playoffs since then.

This year, the Eagles lost only to eventual Class 3A champion Greenville Christian in their district games. They made a run all the way to the semifinals of the state tournament, then won the consolation game to finish third in Class 3A and qualify for the Overall Tournament.

The Eagles didn’t quite get that, but they did lay a strong foundation for the future while also enjoying their most successful season in nearly a decade.

PCA had a balanced team with great chemistry, but Hallberg said none of it was possible without Taylor.

“Without him, we’re not here,” Hallberg said. “I don’t know how many 30-point games he had this year, but it was a bunch. He was the go-to guy when we needed him to score — and not just score. Defenses paid so much attention to him that it opened up lanes for Nick and Lawson. Without him, they don’t get as easy of looks.”
Two years after staring down the end of his career in organized basketball, Taylor finished it on top of the mountain.

“It feels great. It’s a blessing. I didn’t really see it coming at the beginning of the year because I had a rough start, but it came out good,” he said. “When I came I thought I was going to get my little thing, talk to a few colleges or whatnot. But I never saw it getting this big.”