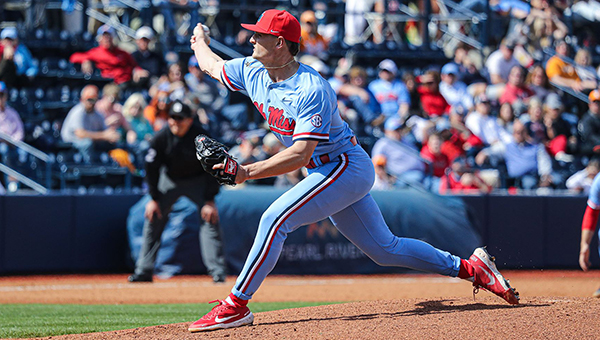 It left humbled and bruised.

Drew Beam allowed one run and struck out six while pitching into the eighth inning, Drew Gilbert hit a two-run triple, and Tennessee beat Ole Miss 4-3 on Sunday to complete a three-game sweep at Swayze Field.

No. 5 Tennessee (23-1, 6-0 Southeastern Conference) outscored top-ranked Ole Miss 22-4 in the first two games of the series.

Ole Miss (16-4, 2-4) lost its first series of the season and was swept for the first time since a home series against Mississippi State in May 2019.

Gilbert’s triple in the fourth inning helped Tennessee to a 4-0 lead, but the Rebels rallied late to make things interesting.

Hayden Dunhurst hit a three-run home run in the eighth inning to cut the deficit to one run. In the bottom of the ninth, Reagan Burford led off with a single and moved to second on an error. Dunhurst came up again, but struck out to end the game.

It was the last of five strikeouts for Tennessee pitcher Redmond Walsh, who worked the last 1 1/3 innings for his third save of the season.

Ole Miss will host North Alabama in a midweek game Tuesday night, and then go on the road next weekend to play a three-game SEC series against Kentucky.

This time, though, the home team was on the wrong end of it.

Drew Williamson went 2-for-3 with a home run, two RBIs and two runs scored, and Alabama plated three runs in the top of the ninth to put away Mississippi State in the finale of their SEC series in Starkville.

Mississippi State (15-10, 3-3 SEC) won the first two games with walk-off hits. This time it was the Tide (14-11, 2-4) who had the ninth-inning touch, getting RBI singles from Zane Denton, Owen Diodati and Dominic Tamez to blow open a tight game.

For the Bulldogs offensively, Logan Tanner led the way with a 2-for-4 effort with a double, one RBI and two hits. Mississippi State left 10 runners on base.

The Bulldogs will go ont he road for their next four games, with a visit to Memphis on Tuesday followed by an SEC series at Arkansas beginning Friday night.

The Golden Eagles had 35 runs, 49 hits and 10 home runs in the three-game series. They’ve scored 10 runs or more in each of their last four games.

Sargent led the Golden Eagles with three hits and drove in four runs, while Wilks went 1-for-3 with a three-run homer. Sargent and Wilks hit four home runs each during the series, and Sargent went 10-for-15.

Waldrep (2-1) picked up his first complete game as he limited the Hilltoppers to just three baserunners, all on hits, to go along with a career-best 13 strikeouts in the seven-inning game.