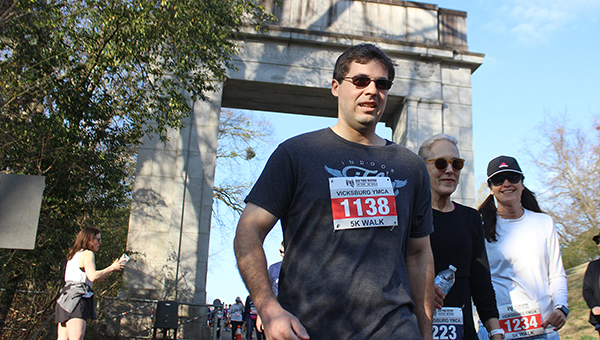 Daniel Duke (1138) joins a pack of race walkers as they pass through the Memorial Arch in the Vicksburg National Military Park during the 2022 Run Thru History. (Ernest Bowker/The Vicksburg Post)

The COVID-19 pandemic unofficially began on March 11, 2020, ushering in an era of uncertainty as the world shut down. Events were canceled en masse, schools and offices closed, and society shifted on its axis as people learned how to fight and live with the virus.

In deciphering the new world order, however, people clinged to some habits to feel normal. One of the primary ones was running.

“Even in the depths of the pandemic, you still saw crowds of people at the Military Park using an outdoor venue. It really became a rallying place for Vicksburgians to come to,” said Phillip Doiron, the executive director of the Vicksburg YMCA and race director for the Run Thru History. “The Park was great about keeping it open for us. Running has been a thread through this whole thing.”

Besides individuals running and walking, Vicksburg’s running events provided checkpoints on the path away from the new normal and back toward the old one.

The 2020 Run Thru History was one of the last large events before the pandemic not only in Vicksburg, but all of Mississippi. Nearly four months later, the Star Spangled Night Run 5K allowed residents to take the first steps out of the pandemic.

The Night Run was the first Mississippi Track Club race in the state since the Run Thru History. A total of 123 runners and walkers started in waves, wore facemasks and mixed the scents of sweat and hand sanitizer in equal amounts.

“It was a little scary because COVID was scary and people were still scared,” said Stacey Mahoney, the executive director the Southern Cultural Heritage Foundation. The SCHF operates both the Star Spangled Night Run and Over the River Run as fundraisers.

“We made changes, we made sacrifices. Instead of pizza we had everything pre-packaged and we had drinks set out so people wouldn’t go digging in coolers,” Mahoney added. “We tried to think out all the little things that would make people feel safe.”

In the fall and winter of 2020-21, running events again helped Vicksburg regain some normalcy. The Over the River Run in October had many of the same procedures as its summertime cousin the Night Run, but with nearly 300 participants.

The Reindeer Run 5K in December 2020 drew 200 people and raised thousands of dollars for Paws Rescue. The Chill in the Hills 10K a month later ushered in a new year.

The Run Thru History in March 2021 was relocated across town — the Vicksburg National Military Park, its traditional home, was still closed by the federal government — but managed to make the best of it.

The cycle of races continued in 2021 and early 2022. Vicksburg Catholic Schools’ and ERDC’s Mad Scientist 5K events returned after being canceled in 2020. The Chill in the Hills again kicked off the 2022 calendar.

“I’m sure there were some people saying we shouldn’t do it, but we had more of them saying, ‘Thank you so much,’” Mahoney said. “The feedback we got was more on the positive end, and thanking us for coming up with ways to make it safe.”

Finally, on March 5, 2022, the Run Thru History returned to the Vicksburg National Military Park. It was quite a homecoming, with nearly 600 runners and walkers tackling the park’s hills like they had done for 40-plus years before COVID became along.

“We love our gatherings and our events, and it’s hard when we haven’t had them or they’ve been on small or virtual scales,” said Bess Averett, the Executive Director of Friends of the Vicksburg National Military Park. “So it’s really a celebration to see the public gather again, to be at this important historical place together, it’s really refreshing.”

The run was the main event on that sunny Saturday morning, but only one facet of the celebration. Before the race, friends and families mingled while they warmed up. Afterward, they headed across the street to the Hampton Inn’s parking lot for the Run Thru History’s famous after-party.

Beers flowed, hot dogs and bananas were gobbled, and young and old alike danced to the sounds of Vicksburg band The Chill in a scene that was strikingly ordinary.

“It is awesome to see all these people. It is so much fun to see all the people, and all the excitement and all the kids. This is the best,” Vicksburg resident Kristi Hall, who won the Run Thru History women’s championship for the second year in a row, said after the race. “It feels like a huge party. I haven’t even gotten to the party yet and it feels like a huge party.”

Rodgers Coffing, who along with Gary Sessums is one of only two people to have participated in all 43 Run Thru History races, put it a little more simply.

“It makes me feel like some part of my life is normal,” Coffing said.

For more than 40 years the Run Thru History has been one of Vicksburg’s biggest community events. Over the past two years, the other races that joined it on the annual calendar also took their place as noteworthy events by offering the city’s residents an outlet during a difficult time.

“Last year we had a little over 300 runners and it just didn’t feel the same,” Doiron said. “The energy that you get from a large crowd is just great. It’s great for running, great for the community, and it’s great to get people together again.”