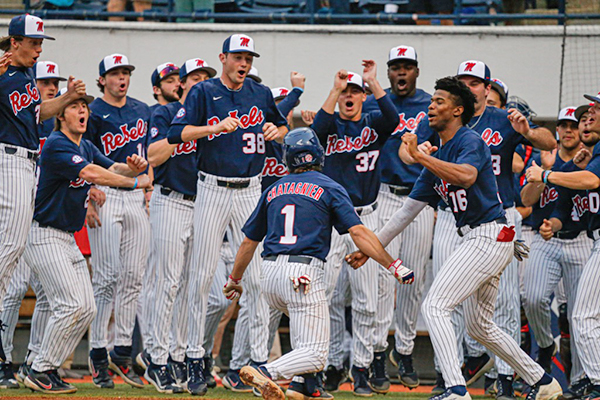 Ole Miss' Peyton Chatagnier (1) is greeted at home plate by his teammates after hitting a home run Tuesday against North Alabama. It was one of five homers the Rebels hit in a 20-3 victory. (Joshua McCoy/Ole Miss Athletics)

OXFORD — Ole Miss bounced back in a big way from a disappointing weekend.

The Rebels hit five home runs and posted a season-high run total as they blasted North Alabama 20-3 on Tuesday. Ole Miss scored seven runs total while being swept by Tennessee over the weekend.

Calvin Harris had one of Ole Miss’ home runs, a two-run shot in the second inning, and also drove in runs with a double and a single. He finished 3-for-4 with five RBIs.

Justin Bench was 2-for-4 with three RBIs and three runs scored, while Jacob Gonzalez and Hayden Leatherwood both had two hits and scored twice.

Harris, Bench and Gonzalez all homered, along with John Kramer and Peyton Chatagnier. The Rebels (17-7) scored in all six innings in which they batted during the seven-inning, run-rule shortened game. They scored five runs in the third inning, and Bench’s three-run homer highlighted a nine-run rally in the fourth.

Ole Miss’ road game at Memphis on Wednesday was canceled because of the threat of severe weather. It will play at Kentucky Friday at 5:30 p.m. in the opener of a three-game Southeastern Conference series.

Mississippi State 10, Memphis 4
Kamren James and Logan Tanner both homered to trigger a six-run rally in the sixth inning, and Mississippi State (16-10) rode that to a midweek victory over Memphis (12-9) on Tuesday.

The Bulldogs trailed 4-0 through five innings. Jess Davis led off with a walk and James homered on the next pitch. One batter later Tanner hit a solo shot to cut it to 4-3.

Two walks, an error and a wild pitch gave the Bulldogs the lead, and R.J. Yeager drove in another run with a groundout to make it 6-4.

The Bulldogs padded the lead with a single run in the seventh inning and three more in the eighth.

James finished 2-for-3 with three RBIs and two runs scored.

Jackson Fristoe pitched three innings of scoreless relief for his first save of the season. He had four strikeouts, while walking one batter and allowing one hit.

Zach Wilson tripled and drove in two runs for Memphis.

Mississippi State, which has won five of its last six games, will head to Arkansas for this weekend’s SEC series. The opener is Friday at 6:30 p.m. and will be televised on the SEC Network.