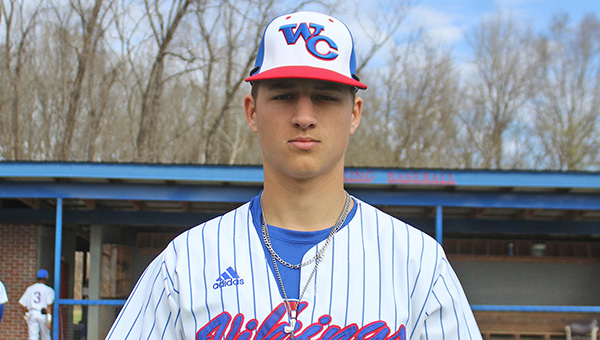 Warren Central's Seth Sterling went 3-for-4 with three RBIs in an 11-2 win over Terry on Tuesday.

After two difficult weeks, Warren Central’s baseball team finally got something to smile about.

Brooks Willoughby had nine strikeouts in five strong innings on the mound, Seth Sterling went 3-for-4 with a double and three RBIs, and Warren Central routed Terry 11-2 on Tuesday for its first region win of the season.

Warren Central (6-8, 1-2 MHSAA Region 6-6A) snapped a five-game losing streak in which it was outscored 41-4. It surpassed that total in the second inning alone on Tuesday.

Blake Channell was hit by a pitch and Kylan Landers walked, both with the bases loaded, to bring in a pair of runs. Sterling followed with a two-run double, and two more runs scored on an error to give the Vikings a 6-1 lead.

Sterling also hit an RBI single in the fourth inning, and Jack Wright had one in the sixth.

Willoughby allowed two runs on two hits during his stint on the mound. Wright pitched the last two innings without allowing a hit or a walk, and had two strikeouts.

Tyler Carter and Rashad McCroy both homered for the Gators, and Terrance Johnson was 2-for-2 with a double, three RBIs and three runs scored.

McCroy had two RBIs and scored twice, and Conner Harrigill was 3-for-3. The Gators scored eight runs in the first inning and eight more in the second to end the game in three innings via the mercy rule.

Bankston doubled and scored on a sacrifice fly in the first inning, and then hit an RBI double in the second as Copiah jumped out to a 5-1 lead.

Barrett Shows hit an RBI single and another run scored on an error in the sixth inning as St. Al cut it to 5-3. The rally ended with a runner getting picked off of third, however, and the Flashes stranded another runner in the seventh.

St. Al and Copiah will play a varsity doubleheader Friday at Bazinsky Field, beginning at 4 p.m.

J.B. Middleton hit a grand slam in the fifth inning to put Benton ahead 6-1, and also locked the Eagles down for 5 2/3 innings on the mound. Middleton allowed one run on two hits and two walks, and racked up 16 strikeouts.

Austin Moore also had two hits, including a double, and scored twice for Benton.

Lawson Selby went 2-for-4 with a double, one RBI and two runs scored for PCA (10-5, 3-2 MAIS District 3-3A). He hit an RBI double and scored on an error in the sixth inning to spark the Eagles’ comeback bid.

Gage Palmer reached on an error and scored on a single by John Wyatt Massey in the top of the seventh inning to cut it to 6-5. PCA’s last two batters struck out with the bases loaded, however, to end the threat and the game.

PCA and Benton will play again Thursday at 6 p.m. in Vicksburg.

Tallulah scored all of its runs in the first four innings, including four in the fourth inning when Morgan and Todd Etheridge both hit RBI doubles to put the Trojans ahead 8-1.

Tallulah and Franklin will play a doubleheader Friday at 4 p.m. at Franklin.