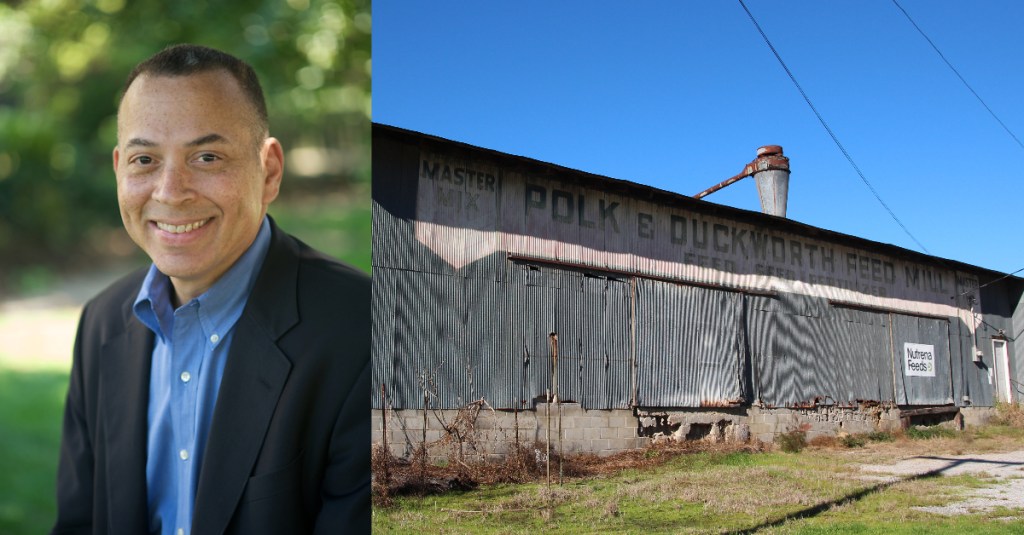 “One of the things I mention in my talk is the abandoned Feed and Seed store in my hometown,” Eubanks said of his talk on Delta Farmland and Culture, presented at the Catfish Row Museum on Saturday. (Photo by W. Ralph Eubanks)

Fifty-five years ago this month, U.S. senators Robert F. Kennedy and Joseph S. Clark led a Congressional delegation to the Mississippi Delta at the urging of civil rights lawyer Marian Wright to investigate conditions in one of the nation’s most impoverished regions.

The Economic Opportunity Act, signed into law by Lyndon B. Johnson in 1964, had fired the first salvo in the so-called “War on Poverty,” but reports from the Delta continued to reveal the human cost of decades of oppressive Jim Crow laws and the system of enslavement they had replaced.

What Kennedy saw — the dilapidated shacks, families surviving on as little as cornbread and beans and young African American boys, girls and adults attempting to learn life and jobs skills through it all — shocked the New York senator. W. Ralph Eubanks, an academically decorated author and essayist from Mount Olive in southern Mississippi, says a similar trip today would reveal a very different story, but not because poverty no longer exists. It’s because we have hidden it.

“The black farming legacy is these were poor people who were working the land and trying to make it on their own,” Eubanks said. “But now, in so many ways, that legacy has become invisible.”

Land ownership, Eubanks says, is a key factor. In 1910, Black farmers in Mississippi owned 2.2 million acres of land, the most of any state, according to a 2019 article in The Atlantic. Between 1950 and 1969, 6.6 million acres of Black-owned farmland in the U.S. were lost — more than 800,000 acres of it in Mississippi. The U.S. Department of Agriculture reports only about one percent of farmland is owned by Black farmers today.

The practice of separating Black farmers from their land wasn’t confined to the Jim Crow era, though. According to a 2005 article in The Nation, “In 1984 and 1985, at the height of the farm crisis, the USDA lent a total of $1.3 billion to nearly 16,000 farmers to help them maintain their land. Only 209 of those farmers were Black.”

On April 2, Eubanks, whose work focuses on race, identity and the culture of the American South and Mississippi, will speak about the legacy of Black farming in Mississippi at Catfish Row Museum. The author of the 2021 book “A Place Like Mississippi: A Journey Through a Real and Imagined Literary Landscape” will explore the transition from family-owned farms to corporate farming and how it has impacted the Black family, among related topics.

A drive up U.S. Highway 61 today through the heart of the Delta won’t take you past many of the shacks or remnants of sharecropping like Kennedy saw, Eubanks says. Instead, the impoverished people of the Delta now cluster in small towns depressed by mechanization and the conglomeration of small farms into massive corporate farms. One such community is Drew, which lies 11 miles east of U.S. 61 along the western spur of U.S. 49.

Like scores of other small Delta towns, Drew is a tiny municipality — barely more than a single square mile in size, with fewer than 1,500 residents — surrounded by flat farmland to the horizons. The fertile soil that grows bounties of soybeans and cotton lies outside the city limits, though, so Drew doesn’t benefit from the tax base.

Other towns have been bypassed by design. Highway 61 whisks travelers around Rolling Fork, Hollandale and Mound Bayou now instead of through the town centers, and farther north, a four-lane, interstate-style stretch sweeps around Clarksdale. While the factors driving poverty still exist, they are no longer omnipresent.

“There are still food deserts. There’s still food insecurity. But are the levels different?” Eubanks said. “Driving up to the Delta, I go through the little towns and see small houses, shotgun houses. And you realize, yes, that used to be out on that physical landscape that I drove through. Now it’s concentrated in a little town, and again, we don’t see that food insecurity. It’s invisible to most of us.”

Eubanks is currently working on a book that will delve deeper into the causes and effects of the loss of land, poverty, food deserts and the many other social and political ills responsible for the state of affairs in the Delta. Among those are policy issues that have disadvantaged the people of the Delta, and the myths that prevent people from seeing those disadvantages. The same types of questions brought his father to Mississippi in 1949 in hopes of helping turn former sharecroppers into landowners.

“As I tell people, Mississippi fought a war on the War on Poverty,” He said. “One of the things I’m trying to discern is, ‘What has changed since Robert Kennedy’s trips to the Delta in 1967?’”

Mississippi’s Black Farming Legacy with Ralph Eubanks is part of Food for Thought, a series of hands-on workshops, curatorial events and programs centered around local foodways. It’s made possible through a grant from the Mississippi Delta National Heritage Area.

Food for Thought Program Schedule:
All programs begin at 2 p.m. and will be at the Catfish Row Museum, 913 Washington St., in downtown Vicksburg. For more Food for Thought programs, workshops and lab hours, visit catfishrowmuseum.org.

Saturday, April 2: Mississippi’s Black Farming Legacy — Ralph Eubanks, writer and essayist whose work focuses on race, identity, and the culture of the American South and Mississippi