Tallulah Academy picks up the pieces after tornado damages building 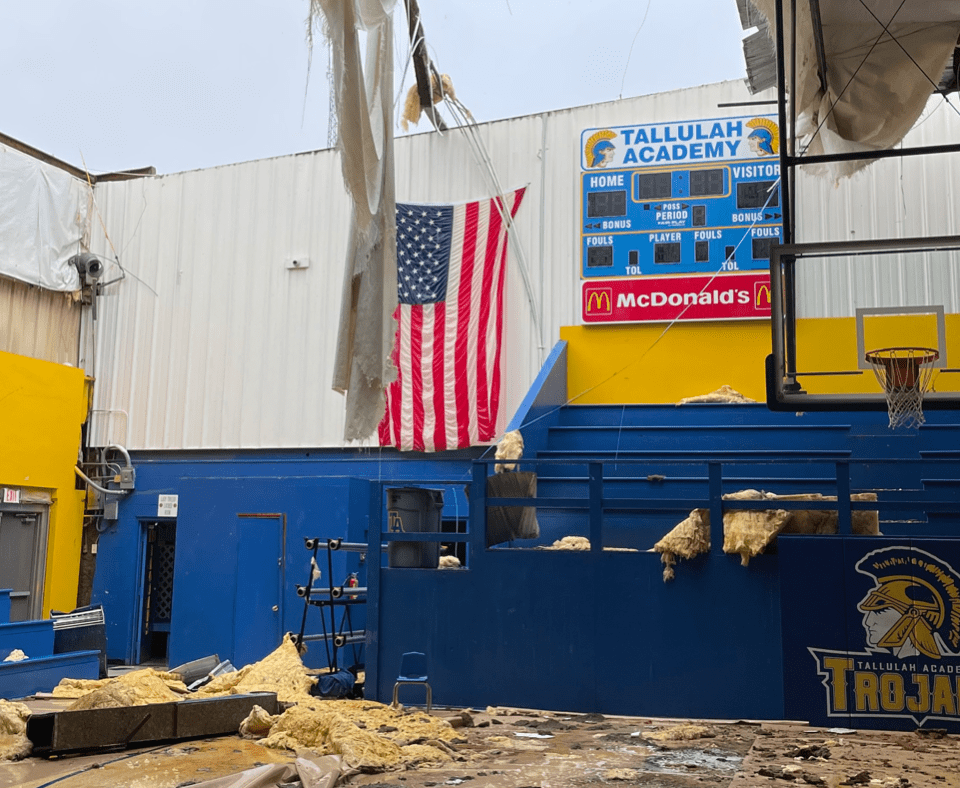 As the skies cleared, the Tallulah Academy community took stock.

The school’s building was in shambles, heavily damaged by an apparent tornado that peeled the roof off Wednesday afternoon. Its future, both immediate and long-term, is uncertain while plans are formed to finish this school year and begin the next one.

But, school officials said, there was one silver lining — everyone will be there to go through it together.

Classes were canceled ahead of Wednesday’s severe weather outbreak, so no one was in the building when the storm hit. The decision likely saved lives, Tallulah Academy advisory board president Byron Vining said.

“I have to give credit to (headmaster Betina Ann) Finlayson. She called off school and this hit at 2:50 or 3 in the afternoon,” Vining said. “We would have had kids here and parents waiting in their cars to pick them up. There’s no telling what could have happened.”

What did happen was bad enough.

What is assumed to be a tornado — National Weather Service crews still must survey the damage to confirm it was — appears to have touched down just south of the school. It traveled in a northeasterly direction, slicing through the south side of the school building like a laser beam and also damaging a baseball and softball complex about a quarter-mile to the northeast. The same tornado is believed to have damaged homes in the Eagle Lake community on the Mississippi side of the Mississippi River.

“You can tell by the way things were damaged that it was definitely a twisted wind. It wasn’t straight-line winds,” Tallulah Academy football coach Bart Wood said. “There’s a trampoline on a power line and we don’t know where it came from. There aren’t any houses next to the school.”

As the wind peeled the metal roof off the two-story building, it also folded it back and punched holes in other parts. That allowed rainwater from the storm to pour into classrooms and the gym, which were exposed to the sky.

Classroom contents took water damage and computers were destroyed, adding to the loss. Vining, however, said that a quick response was able to save a number of items.

“As soon as it happened, people were up here helping us get anything out and they saved a lot. We have a cafeteria full of items that we were able to save,” Vining said.

For all of the damage that was done, some parts of the building were spared. An elementary school that is detached from the main building took no damage at all, and other parts of the high school were also spared. The school’s cafeteria and business office, located in the front of the school, are usable.

The concrete field house and football stadium also suffered only minor damage, despite sitting just a few feet away from the mangled school building.

“I have two classrooms upstairs. One was untouched and the other one had daylight showing through,” said Shannon Capdepon, Tallulah Academy’s athletic director, tennis coach and track coach.

While they literally pick up the pieces, school officials are also trying to figure out how to move forward.

Vining said classes at the undamaged elementary school could resume Monday. A number of churches in Tallulah have offered their facilities to host classes for approximately 70 high school students.

Vining said members of the school’s board and administration are still evaluating the best options. One of the churches, Parkview Baptist, is located across the street from Tallulah Academy.

Activities are also going on as scheduled. Capdepon was on her way to a tennis tournament in Monroe on Thursday morning. She and Vining were hopeful that the baseball field, which mostly suffered damage to fences and bleachers, could be cleaned up in time for Tallulah’s next home game on April 8.

“We’re not canceling anything as far as sports,” Capdepon said.

Vining also said school officials will need to develop a plan for the 2022-23 school year. He did not expect the building to be repaired and ready by August.

“It took almost half of a complete roof and peeled it back. It’s completely exposed, so until you put a new roof on there’s no way to keep any of the water out,” Vining said. “You look at it realistically, with the supply chain the way it is, there is no way we’ll be ready for the start of the school year. We will look into our options moving forward. We’ll have the summer to figure that out.”

The offer from Tallulah’s churches was only one part of the support the community and other schools have shown, Vining added. Several other members of the Mid-South Association of Independent Schools offered the use of classrooms or athletic facilities.

Alumni and random people have offered monetary donations. Others simply volunteered time and labor to assist with cleaning up debris and repairing what can be fixed.

“We’ve had a lot of outreach from everywhere. I showed up at 7 this morning and there were already people asking, ‘What can we do?’” Vining said. “We had a great outreach from other schools about offering extra classrooms and whatever we need. I had a lot of requests from alumni, people out of town, asking, ‘How can we help?’ We were on the Today Show this morning, so people all over saw that. We appreciate anybody’s help, whether it’s picking up debris or just giving us their prayers.”

An account for donations has been set up through Tallulah Academy’s PayPal account, or in person at Tensas State Bank’s location in Tallulah. School officials also said they are in need of cardboard boxes to pack up salvaged items.

“Usually when stuff like this happens, people step up you’ve never heard of,” Wood said. “Pray to God they do, because we need it.”

Mississippi State Department of Health Warns of Safety After…