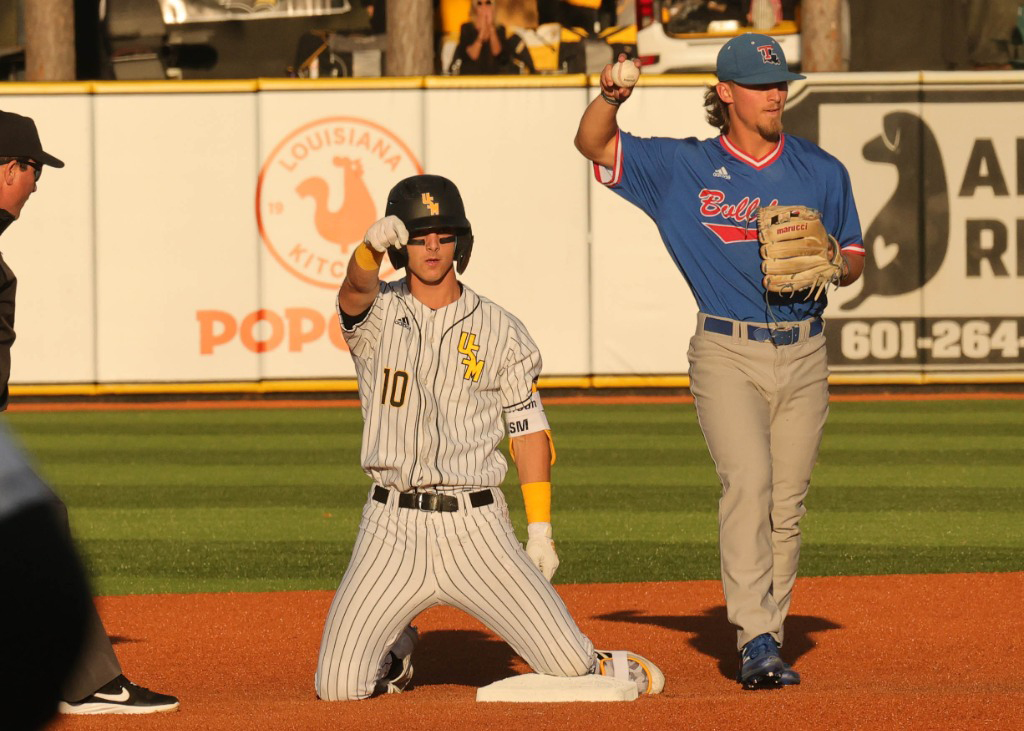 HATTIESBURG — Southern Miss added a dose of excellent pitching to its hot hitting Friday night, and it was an unbeatable combination.

The Golden Eagles (18-7 overall, 6-1 Conference USA) took over sole possession of first place in Conference USA after winning their fifth straight game. They’ve scored eight runs or more in all five games, and hit 16 home runs during the streak.

Reece Ewing, Will McGillis and Carson Paetow all went deep in this one. The homers by Ewing and McGillis, along with a two-run single by Gabe Montenegro, staked Southern Miss to a 5-0 lead after four innings.

Hall (4-0) scattered six hits and did not walk a batter during his outing. It was the third double-digit strikeout performance for Hall this season and he retired eight batters in a row at one point. Landon Harper came in to throw a scoreless ninth in a non-save situation.

“We swung it well last weekend at Western Kentucky and it carried over into today,” Southern Miss coach Scott Berry said. “We had some great at-bats. The thing that impressed me is how we used the whole field. We hit well with strikes. When you hit three home runs and you get the pitching like we did with Tanner (Hall), it’s hard to win today if you are the other team.”

Game two of the series is Saturday at 2 p.m. at Pete Taylor Park, and the finale is Sunday at 1 p.m.

Ole Miss 2, Kentucky 1
Hayden Leatherwood ripped an RBI single to right field in the top of the ninth inning for the go-ahead run, and Ole Miss (18-7, 3-4 Southeastern Conference) took the opener of a three-game series against Kentucky (17-10, 2-5).

T.J. McCants led off the ninth inning with a triple and scored on Leatherwood’s hit.

Dylan DeLucia started for the Rebels and allowed one unearned run in 6 1/3 innings, while striking out five and walking one.

Four Kentucky pitchers combined to keep the Rebels’ potent lineup in check. Ole Miss only had five hits and its batters struck out 14 times. Kentucky had three hits.

The series will continue Saturday at 2 p.m. and Sunday at noon. Both games will be streamed on SEC Network+.

Arkansas 8, Mississippi State 1
Jalen Battles hit two home runs, including a two-run shot that keyed a six-run rally in the second inning, and No. 2 Arkansas (20-4, 6-1 SEC) knocked off Mississippi State (16-11, 3-4) in the series opener in Fayetteville.

Logan Tanner hit a solo home run in the fourth inning to account for Mississippi State’s only run.

Mississippi State and Arkansas will play Saturday at 6:30 p.m. and Sunday at 2 p.m. Both games will be streamed on SEC Network+.