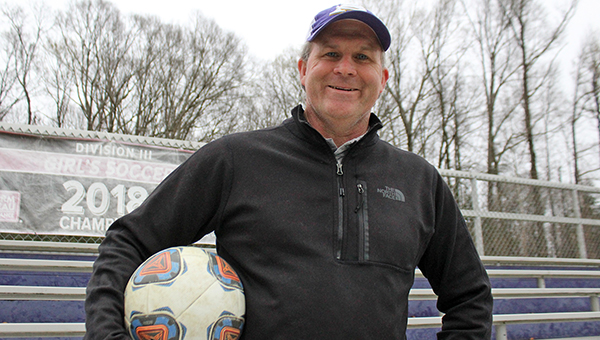 On the surface, St. Aloysius’ soccer season seems perfectly average. It finished with a 10-9 record and lost in the first round of the MAIS Division II playoffs, nothing too special.

Dig just a bit deeper, though, and average becomes remarkable.

St. Al fielded a lineup that had eight eighth- and ninth-graders and two seniors. It gutted out four overtime victories in district games, most of which involved overcoming multiple-goal deficits.

Figuring out how to push the right buttons both in the long term and in the heat of the moment took a delicate touch, but head coach Jay Madison had it all season long. His leadership turned what could have been a bad season into a good one, and for that Madison is the 2022 Vicksburg Post soccer Coach of the Year.

“It is very flattering for me to win the award. But it’s about that senior group. It’s about those younger players,” said Madison, who is in his third season at St. Al. “I didn’t score any goals. I didn’t make any kicks. I didn’t do any of that. We tried to put them in the best position to do that, and to compete and win.”

Madison gave plenty of credit to assistant coach Colby Goggans, who he said collaborated on many of the key moves that kept the Flashes heading in the right direction.

The first of those came early in the season, when they shifted some personnel to bolster a struggling defense. Junior Will Dowe was moved to the defensive end and provided invaluable leadership.

“Early in the year we were giving up a ton of goals,” Madison said. “We came back, Colby Goggans and I, and said we can wait until the end of the year to make changes or we can go ahead and make them right now. If they’re wrong, they’re wrong. We didn’t get everything right. We got much better on the defending side.”

The Flashes still gave up their share of goals, but always seemed to score in bunches as well. Five of their six district games went to overtime, and they won four of them. In nearly every one, St. Al had to come from behind at some point. In a 6-5 district win over Washington, they scored twice in overtime after falling behind 5-4.

“They just never gave up,” Madison said. “We would talk about it and tell them, ‘They’ll tell you when the game is over. Don’t look at the clock. Just keep playing.’ And they did. In some instances that paid off for us.”

As remarkable as the Flashes’ resiliency was the fact they were hardly a veteran team. Several players — Dowe, his twin brother Thomas, leading scorer Cooper Madison and goal keeper Chase Tucker — had a lot of experience, but St. Al mostly relied on a slew of young players to get the job done.

Seven eighth- and ninth-graders were starters, and several others were routinely shuffled in and out of the lineup. Freshmen Eli Shiers and John Ellis Montgomery combined for 15 goals and nine assists, while others like Dalton Windham, Corbin Burroughs and Brody Barnett contributed on defense or in the midfield.

“I sure don’t want to take anything away from them, because they gave their all,” Jay Madison said.

The Flashes lost to Starkville Academy in the first round of the playoffs. Although understandably disappointed, Madison was hardly discouraged by it. As he looks at the returning roster for the 2022-23 season — and beyond — he sees a team with the potential to add a state championship banner or two to the ones St. Al won in 2018 and 2019.

His son Cooper Madison — the 2022 Vicksburg Post boys Player of the Year — and the goal keeper Tucker are the only two departing seniors.

“We lost to Starkville, who had eight seniors, and they lost to Copiah who had 12 seniors. So you see a trend there,” Jay Madison said. “Those seniors end up making runs. In a couple years from now we’ll have several juniors and several seniors.”