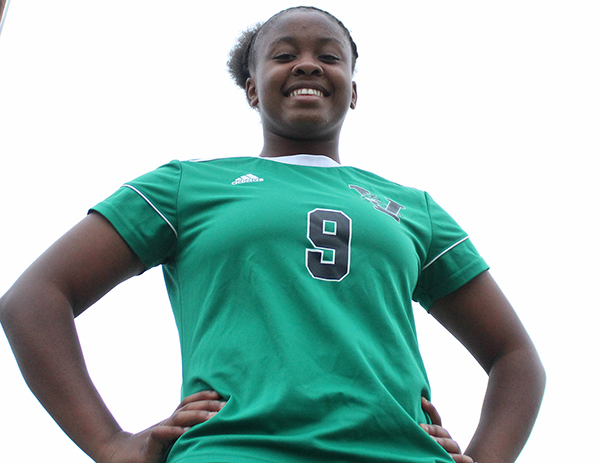 Vicksburg's Trinity McGloster is the 2022 Vicksburg Post girls soccer Player of the Year. The freshman forward scored 14 goals to lead the Missy Gators to the MHSAA Region 4-5A championship. (Ernest Bowker/The Vicksburg Post)

Trinity McGloster has had a busy year.

In the fall, she decided to answer the call and play football for Vicksburg High. She became a placekicker, made several PATs, and became the school’s first female football player since 2014.

This spring, she’s a starter for Vicksburg’s softball team.

And in between those two endeavors, she was at her best as a soccer player. The freshman led the Missy Gators in scoring, with 14 goals, and helped them win the MHSAA Region 4-5A championship for the third year in a row.

No matter how she does in her other sports, McGloster has earned a place in history as the 2022 Vicksburg Post girls soccer Player of the Year.

“It’s awesome. When I heard it, I was on the softball field and Coach Bailey told me I won the soccer player of the year. I just started jumping with joy,” McGloster said of winning the award. “I wasn’t thinking about it at the time because of the quick transition from soccer to softball.”

McGloster also had a quick transition from one form of football to another.

Last September, when Vicksburg’s football team was in need of a kicker, assistant coach Chris Lacey asked McGloster about coming out for the team. She did, and kicked a half-dozen PATS in the second half of the season to help the Gators reach the second round of the MHSAA Class 5A playoffs.

As soon as that season ended in November, she jumped back into soccer. McGloster admitted it took some adjustment both mentally and physically.

“As soon as I got done with football I quickly transitioned to go to soccer. So it was practices back-to-back, five days a week,” she said. “I made sure I was in the right mindset and stayed on top of my schoolwork. Right after practice, or even after games I made sure all of my schoolwork is done and everything is right.”

On the pitch, McGloster was more than right. She was excellent. She had her third consecutive season with a double-digit goal total. She’s been a starter for the soccer team all three years and already has 39 career goals.

With another three years to play, she has a much larger number in mind.

“At the end of my senior year, I haven’t had a set number, but I want to have at least 100 goals — or more. More is great,” McGloster said.

As a three-year starter and a focal point of the offense, McGloster has also ascended to a unique position.

The Missy Gators’ 2021-22 roster did not have a senior on it, and McGloster was one of seven starters in grades 8-10. Her experience makes her a veteran, however, and one of the team leaders. In addition to playing forward, she also pivoted to the midfield on occasion to help protect leads.

“I was kind of used to it during tournament soccer and softball, because I’m one of the more experienced players, so it wasn’t really anything new,” she said.

With McGloster scoring goals in bunches, the Missy Gators won another region championship. They lost in the first round of the playoffs, but the future looks bright for such a young team.

“This year, with a lot of newcomers and people who were new to soccer, it was a good season. We started off kind of rough, but as we got through the season we formed our bond and once our bond was formed we were playing great,” McGloster said. “The goal for next year, like always, is to win district and then strive to go past the first round — maybe even the second round — and work hard as a team to get up to that level.”