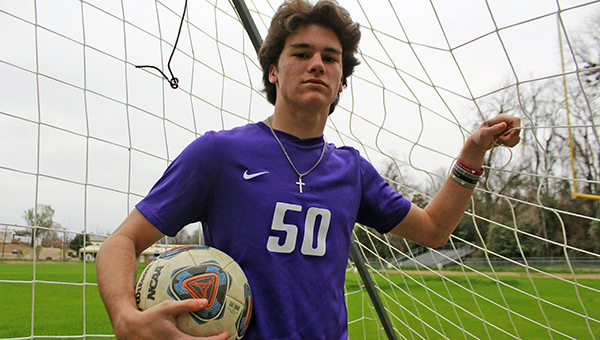 Over the past three seasons, Cooper Madison has made the No. 50 soccer jersey at St. Aloysius respected.

The senior has racked up goals and been one of the Flashes’ best players. He’s an MAIS all-star and will continue his career at Copiah-Lincoln Community College.

The number he made famous, however, is not his. He borrowed it from a friend.

It previously belonged to Carson Kurtz, who died in an ATV wreck in June 2019. Kurtz and Madison grew up playing soccer together and were close friends.

“Carson was going to play with us and the last number he wore was No. 50. I decided to honor him by wearing that number,” Madison said. “I feel like I’ve done my best.”

As Madison wraps up his high school career, he’s honored Kurtz, himself and his school in another way — by winning The Vicksburg Post’s boys soccer Player of the Year award.

“Me reaching my peak physically and mentally. I mastered the game in my mind and could see everything and knew everything that was going on. That helped me a bunch,” Madison said. “That was my goal that I set this year. I’m proud of myself that I achieved it.”

Madison was a focal point for St. Al’s offense. He had multiple goals in a number of games, and clutch goals in others. The Flashes won four district games in overtime, with most of them involving comebacks from multiple-goal deficits.
Madison didn’t always score the game-winner, but he always seemed to make a key play to get his team going.

“They knew that if we hang in here, at some point Cooper is either going to get a goal or create a goal with a pass. It was fun to watch,” said Jay Madison, St. Al’s coach and Cooper’s father.

Cooper finished his his high school career with 74 goals and 25 assists. He said his success was simply a combination of coming into his own right at the same time he got an opportunity to play at the varsity level.

“When I was at Warren Central I didn’t think I was capable of this. It is mind-blowing,” he said. “It was just getting an opportunity. I was young and didn’t really get a chance at Warren Central. And then here I got to play as soon as I came in.”

As he wraps up his high school career, Cooper said he’s enjoying sharing his success with some loved ones. Kurtz, of course, who Cooper literally keeps close to his heart with the No. 50 jersey.

And his father, who is the 2022 Vicksburg Post soccer Coach of the Year after leading the Flashes through a tough season and into the MAIS Division II playoffs.

“It’s really nice that we both get this for us and for our family,” Cooper Madison said. “It’s a dream deal getting to play with and for my dad.”

Jay Madison, though, said he turned down one last chance to have his son play for him. When Cooper suited up for the MAIS All-Star Game in early March, Jay said he wanted to simply watch his son play as both a proud father and a soccer fan.

“My wife asked why I didn’t coach the all-star game. That would have been neat,” Jay Madison said. “I said I did not want to. I wanted to be the dad sitting up there. I was glad to be able to that.”