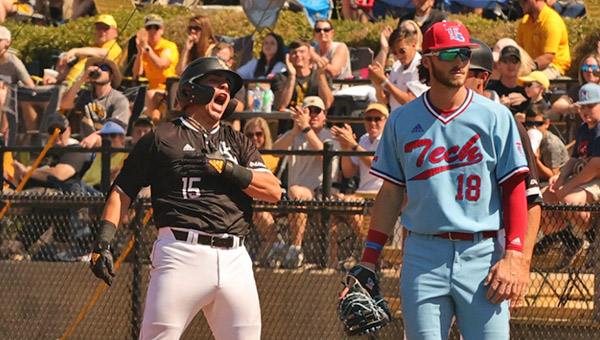 HATTIESBURG — Southern Miss got its groove back on Sunday — as well as a huge conference victory.

“We talked in the pregame about the expectations of this program,” Southern Miss coach Scott Berry said. “Today was all about the sole rights of first place between two good teams and good programs. Our program has a rich tradition and is built on consistency. It’s our job to go out there and be accountable for the expectations that are placed on us. That was the challenge today, to do just that and get the momentum back in our favor.

“We had it on Friday and La. Tech took it away from us yesterday. Certainly, they had it coming in to today. Our guys responded well in all phases of the game.”

Waldrep walked three batters and struck out 10 in seven innings, and then Rogers followed with three strikeouts in two scoreless innings. Louisiana Tech’s only hit was a one-out single by Wade Elliott in the third inning.

Louisiana Tech (19-9, 6-3) was shutout for the first time since early in the 2021 season. It scored a total of six runs in three games this weekend, with half of those coming in Saturday’s 4-2 victory.

By the time Elliott got Louisiana Tech’s first hit, Southern Miss was already ahead 4-0. Slade Wilks hit an RBI single in the first inning, and Paetow a two-run homer in the second. Another run scored on a wild pitch.

The Golden Eagles added four runs in the bottom of the seventh inning, on a single by Rodrigo Montenegro and Ewing’s three-run home run.

“I thought Waldrep handcuffed us all day and he stuck it on us. We got our tails kicked, there is no other way to look at it,” Louisiana Tech coach Lane Burroughs said. “It wasn’t from a lack of competing or a desire to want to, and at the end of the day the guys who have been producing for us all year didn’t do much this weekend. We are fortunate to get out of here with one win.”

Southern Miss plays eight of its next nine games away from Pete Taylor Park. It will be the designated visitor Tuesday night against Ole Miss, in a neutral-site contest at Trustmark Park in Pearl. First pitch is set for 6 p.m.