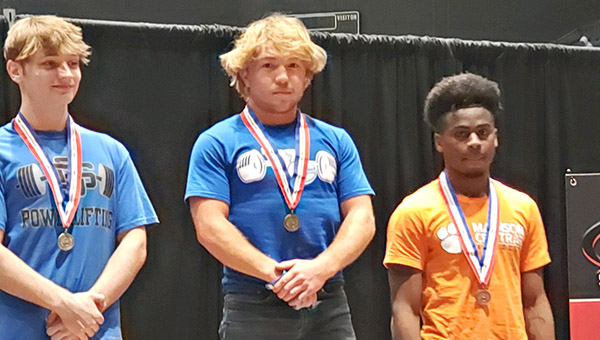 Warren Central's Lane Gordon, center, stands atop the podium after winning the 132-pound championship Saturday at the MHSAA Class 6A state powerlifting meet in Jackson. (Submitted to The Vicksburg Post)

Lane Gordon spent four years climbing the mountain, and is finally getting the chance to enjoy the view from the top.

The Warren Central junior lifted a total of 1,120 pounds in the deadlift, bench press and squat to win the state championship in the 132-pound weight class Saturday at the MHSAA Class 6A state powerlifting meet in Jackson.

Gordon has qualified for the state meet four years in a row, but this is his first state title.

“He has worked his butt off,” Warren Central powerlifting coach Chad McMullin said. “He’s had to work through some injuries this year. But he’s fought through all of that, and yesterday was perfect. I’m proud of him. He’s had to fight through a lot this year.”

Gordon claimed his fourth consecutive North State championship in March, but a state title had proved elusive. He finished sixth in 2019 as a 114-pounder and third last year in the 132-pound division. His best chance to date was in 2020, when he was the favorite in the 123-pound weight class before the state meet was canceled because of the COVID-19 pandemic.

Finally, it all came together on Saturday.

Gordon squatted 485 pounds and bench pressed 225. In the final portion of the competition, he deadlifted 410 pounds to beat Ocean Springs’ Gabe Beemon by 5 pounds on the total weight.

“We were going to bench press 220 and he had been wanting to do 225 so I gave in and said OK. It ended up being a great call by him, because if he hadn’t we would have had to pull a little more in deadlift,” McMullin said. “He probably could have gone another 20 pounds in deadlift, but we just did what he had to do to win.”

Gordon also was recognized as part of the “Super 12” — the state meet’s top lifters by total weight, regardless of weight class.

“He had probably the best meet he’s had all year, from a technical standpoint,” McMullin said. “He was absolutely perfect.”