Sports column: Send us your turkeys! (And fish, and hogs, and sea monsters …) 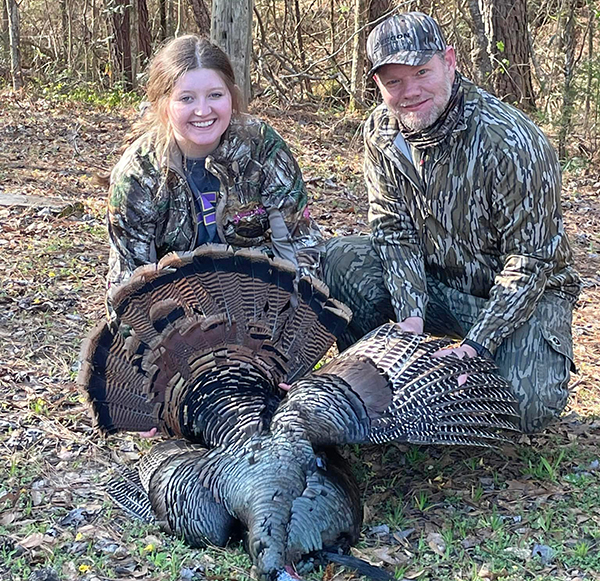 Ayla Verzwyvelt took her first Eastern Wild Turkey — a 20.8- pounder with a 9.25-inch beard and 7/8-inch spurs — during a weekend hunting trip with her father, Nick, in Claiborne County. Ayla, 15, is a 10th-grade student at Warren Central High School. (Submitted to The Vicksburg Post)

One of our great, long-running traditions at The Vicksburg Post is publishing hunting photos.

One of the rites of passage growing up in Warren County is having a picture with your first deer published in the newspaper, but whether you’re young or old we’re happy to celebrate one of the milestones of life in the South.

We received dozens of photos this year, in part thanks to our Best Buck Contest — congratulations to the winner, Skylar Connelly — but once deer season is over the photos usually dry up until next year.

For this spring we are introducing our Turkey Hunting Showcase to … well, to showcase Warren County’s turkey hunters. If you’ve bagged some gobblers, send us your photos and we’ll run them.

After that, we want to see your fishing pictures. Big bass, little bass, bream, crappie, turtles, the Loch Ness Monster, whatever you bring out of the water that’s impressive, snap a photo and send it to us.

We once had a ban on snake pictures, but if there’s a particularly big “no shoulders” that you dispatch, we might even make an exception.

We’re not limiting this to traditional hunting photos, either. Hogs in Port Gibson? Elk in Montana? Bears in Alaska? Yeti in Nepal? Send ‘em all! We once ran a photo of a “vegan hunter” who harvested some huge carrots, so we don’t mind the occasional oddity.

As always, there are a few guidelines:

• Photos can be emailed to sports@vicksburgpost.com or submitted through our website. When emailing photos, please include something along the lines of “hunting photo” in the subject line. Also provide a contact number in case we need more information, as well as the names of the people pictured; the size of the animal; and the date and location of the hunt.

If there are any interesting details about the hunt, let us know in your email. Maybe we’ll write a little longer story on it.

• When taking photos, check to make sure they are well lit and in focus before you send them. Use a flash or light up the area with headlights if it’s dark. It makes a world of difference in the quality of the photo. We’ve received a lot of pictures that were unprintable because of a shaky hand or poor lighting conditions. With modern digital cameras it’s easy to take a second to check the photo and make sure it looks OK before breaking up the pose.

• Watch out for blood and gore. Hunting, by its nature, produces bloody wounds. That doesn’t mean people want to see them. Again, take a quick look at your picture before you save it. If it looks like a crime scene, try a different angle that crops out the worst of the gore. We want to make people smile, not scar them for life.

• Be careful with your weapons. We’ve received a number of deer photos where gun barrels were pointed toward the hunter. Even if it’s unloaded, keep the fundamentals of gun safety in mind.

And with that, we send you off into the world. Bag some turkeys. Reel in some fish. Shoot some photos and them to us. Let’s keep this Vicksburg tradition going year-round.