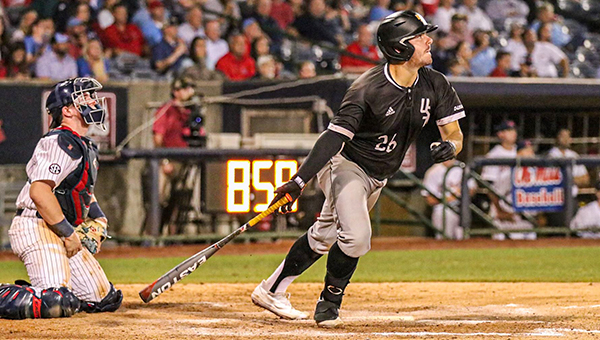 PEARL — One has a higher ranking and another has the national championship trophy in its possession. Among Mississippi’s Big Three college baseball programs, however, Southern Miss has the bragging rights.

Danny Lynch hit a three-run home run in the eighth inning, and No. 18 Southern Miss added another run in the frame as it beat No. 7 Ole Miss 10-7 Tuesday at Trustmark Park.

Southern Miss and Ole Miss will play one more time, in Hattiesburg on May 11.

Southern Miss nabbed this win with the last rally in a back-and-forth game. Jacob Gonzalez doubled in two runs and scored on a balk as Ole Miss scored four times in the bottom of the seventh inning to take a 7-6 lead.

In the eighth, Reece Ewing tripled and scored one batter later on Christopher Sargent’s single through the left side. After a walk to Slade Wilks, Lynch blasted a pitch into the bullpen beyond the right-center field wall to put the Golden Eagles ahead 10-7.

“I was trying to just hit a single and he left one over the plate,” Lynch said. “And I was able to do some damage.”

Garrett Ramsey, the fifth of six pitchers for the Golden Eagles, came in after Ole Miss took its final lead to throw two shutout innings. The former Hinds Community College standout struck out four batters to get the win and improve to 3-0.

Ole Miss chased Ramsey from the game with a late comeback bid in the bottom of the ninth. Peyton Chatagnier doubled and Gonzalez singled to put runners at first and third with two outs. Landon Harper replaced Ramsey and got Calvin Harris to pop out to end the game.

Harper earned his team-leading fourth save.

Southern Miss outhit the Rebels, 14-6, as both Ewing and Will McGillis each had three hits and scored two runs. All but one Golden Eagle in the starting lineup registered a hit. Rodrigo Montenegro had two hits and two RBIs.

Gonzalez was 2-for-5 with two RBIs and one run scored for Ole Miss, and Hayden Dunhurst hit a three-run home run in the second inning.

Mississippi State scored in six of the seven innings, with multi-run innings in the first, second, third and sixth innings. The Bulldogs tied the school record for most home runs in a game.

Brandon Smith (2-1) allowed two runs in four innings pitched to get the win. He did not walk a batter and struck out seven.