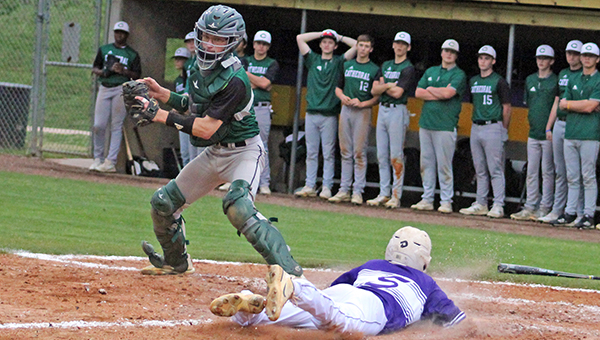 There is a four-game gap between St. Aloysius and Cathedral in the MAIS District 3-5A baseball standings.

Wednesday’s game between the teams showed a glimpse of why that is.

Noah Russ scored the go-ahead run in the top of the seventh inning, sliding in just ahead of the throw from a drawn-in infield, and Cathedral squeaked past its Catholic school rival 6-5.

“We’ve got to get that timely hit. We’ve got to make those plays in those situations. They did and we didn’t. It sums up a lot of our season this year,” St. Al coach Sid Naron said.

St. Al must now win its last five district games — two Friday at Cathedral and three next week against Adams County Christian School — to earn a berth in the MAIS Class 5A playoffs.

“We’ve got to win all five and we’ve got to have something happen for us,” Naron said. “It’s either fight or run. We’re not going to quit coaching and I don’t think they’re going to quit fighting.”

Adam Francisco went 4-for-4 with one RBI and two runs scored for St. Al, and Cole Autrey had two hits and two RBIs. Autrey and Conner Gaul had RBI singles in the third inning as St. Al took a 3-1 lead.

Cathedral, though, scored three times in the top of the sixth to go back in front. Jake Maples scored on a passed ball, and Paxton Junkin hit a two-run single — after the inning was kept alive by a dropped third strike — to put the Green Wave ahead 5-3.

Maples finished 2-for-3 with one RBI and two runs scored.

“We’ve been struggling with the bat all year. We don’t have a lot of innings where we score multiple runs. We finally broke through there and scored three in the top of the sixth,” Cathedral coach Craig Beesley said.

St. Al tied it in the bottom of the sixth as Francisco hit an RBI single and scored on another base hit by Autrey. In the top of the seventh, though, Cathedral continued St. Al’s snakebit season.

Russ led off with a walk, stole second and went to third on a balk. Tanner Wimberley then hit a soft grounder to shortstop. St. Al’s Carson Smith, who was already pulled in, still had to rush up to field it and his throw was late to the plate. Russ slid in ahead of the tag to put Cathedral ahead again, 6-5.

Cathedral’s Jake Hairston then worked around a walk in the bottom of the seventh to strike out the side and finish the game.

“We knew it was going to be a competitive game and a competitive series. We still need to take another game Friday to help us secure that spot in the playoffs,” Beesley said.

St. Al, meanwhile, is trying to find some answers before it’s too late. The Flashes had nine hits, and drew six walks against Cathedral’s pitchers, but left eight runners on base. They left the bases loaded without scoring a run in the fifth inning, and then the tying run was stranded in the seventh.

“Two different times with less than two outs, we had runners in scoring position and didn’t get anything. They did. They got the timely hit and put the ball in play,” Naron said. “They outplayed us.”

Monistere singled in two runs in the third inning and then scored on a hit by Dawson Muenzenmay to stake the Cougars to a 4-0 lead. Rogers hit a two-run double in the fourth to make it 6-0.

Cade Fairley doubled and scored on an error in the fifth inning for Warren Central’s only run. The Vikings’ other hit was a single by Bo Broome in the third inning.

Warren Central pitcher Brooks Willoughby had eight strikeouts and only walked one batter in 4 1/3 innings, but also allowed nine hits and seven runs.

Warren Central and Northwest Rankin will play again Friday at 7 p.m. at Viking Field in Vicksburg.