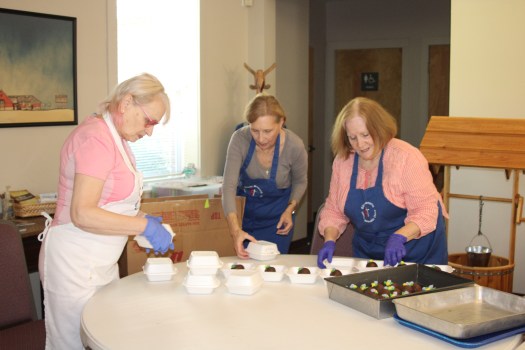 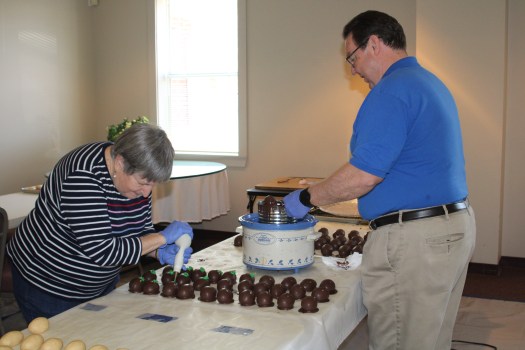 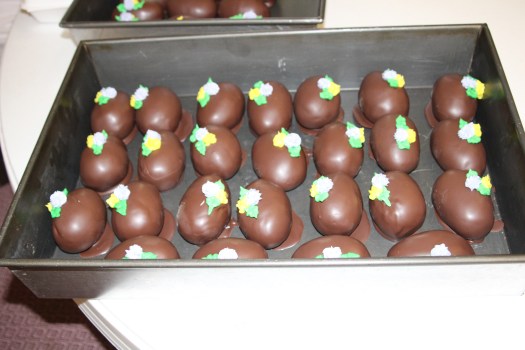 Gibson Memorial United Methodist Church will never challenge Hershey’s or the Mars Candy Co. for supremacy in the chocolate market, but for 35 years, the chocolate-coated Easter eggs church members make annually to raise money for the church’s local missions have been a favorite in the community.

Since the church began making the eggs as a fundraiser 41 years ago, church member Westbrook estimated, the church has made about 100,000 eggs in assorted flavors — almond, vanilla, chocolate, peanut butter, peanut butter with Butterfinger, raspberry, maple nut, coconut and almond coconut. Raspberry is a new flavor.

“Peanut butter is the biggest seller,” Westbrook said. “And peanut butter-Butterfinger; we put crushed Butterfinger in the egg. A lot of people like that. Those two are about half of what we do.”

Westbrook said the idea for the eggs came from the church’s organist when Gibson Memorial was on Washington Street.

“He had a sister who lived in West Virginia and they did it up there,” she said. “She sent the information and we decided to try it.”

The process of making the eggs is done in several steps. The thick filling for the eggs is mixed in the fellowship hall kitchen and moved to a crew of church members, who roll it into the shape of an egg.

Fondant, a rich, sweet type of icing that is normally used for sculpting and icing cakes is used as the filling. The filling is molded by hand and placed on paper-covered tables to wait to be dipped in chocolate. Once the egg is dipped in the chocolate, it is decorated with leaves and a flower, placed in its own box and put with other eggs stacked according to flavor.

The process takes on an assembly line-type appearance as the eggs are laid out, dipped and decorated. The men of the church do the dipping.

“We could not do it without the men,” church member Nancy Ballard said.

And there is another helper who comes from the North to help the church.

Brenda Kubiak of Willoughby, Ohio, comes each year to visit her daughter who lives in Vicksburg and has been helping with the eggs for several years.

“I plan my trip around the Easter eggs. That just shows you how much fun this is,” Westbrook said. “We have people who come from another state to make eggs.”

“We’ll be selling them until they’re gone, so if someone has a special flavor, they’d better get it,” Westbrook said.