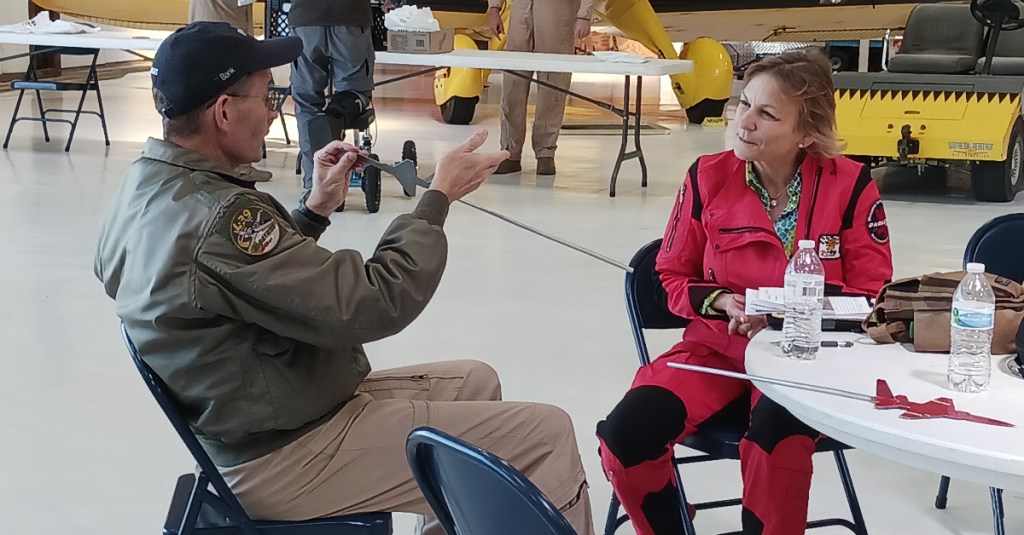 Dianna Stanger, right, discusses a maneuver with pilot Bill Smith during a break at the jet formation clinic at the Vicksburg-Tallulah Regional Airport in Mound, La. Stanger flies a one-of-a-kind L-139 jet trainer/attack plane and has raced it in air races in Reno, Nevada. (Photo by John Surratt | The Vicksburg Post)

MOUND, La. — Among the pilots flying out of the Vicksburg-Tallulah Regional Airport at the recent Classic Jet Aircraft Association’s formation clinic was a woman with a need for speed.

A resident of Calhoun County, Texas, Dianna Stanger is the owner of Dark Star Air Racing and a unique aircraft — an L-139 trainer/attack aircraft built by Aero Vodochody for the Czechoslovakian Air Force — that she has flown in the jet class of the National Championship Air Races at Reno, Nevada, where speeds reach 500 mph.

The L-139, Stanger said, “Is one of a kind. It came available; it was sitting in three parts in a crate. The gentleman I bought it from put it together.”

Stanger, who is a principal stockholder in a Connecticut company that manufactures close tolerance flight safety-critical turbine engine components, said she has been flying since 1994, starting with helicopters.

She made the transition to propeller-driven planes and then into jets, which she began flying in 2014. And while the L-139 has raced at Reno in the past, Stanger said she first flew it in 2021 Reno Races — the only woman in the jet class.

“I did cross-country racing and won a few times so I thought, ‘Why not try something else?’ So I tried (jet) racing,” she said.

As she prepares for her second year of competition, Stanger said, “Formation flying gets me ready for racing, because we fly formation in the race and then it’s in and around flying close to somebody. We go 500 mph, so getting close to somebody is the only way we can pass.”

She added the planes fly in heats of between four to 10 planes.

“This is the safety that keeps racing,” Stanger said. “The more of this I can do, the better racer I am.”

“I’m working on my first (formation) certification,” she said. “I just started a year ago; I had no idea this existed and then once I did, I fell in love with the training because it’s precise and they all operate under the same standards.”

Stanger earned her Formation and Safety Team, or FAST, cards during the formation clinic. Does that mean she will move into formation flying?

“I think I would add it to the racing,” she said. “The racing is only once a year.”