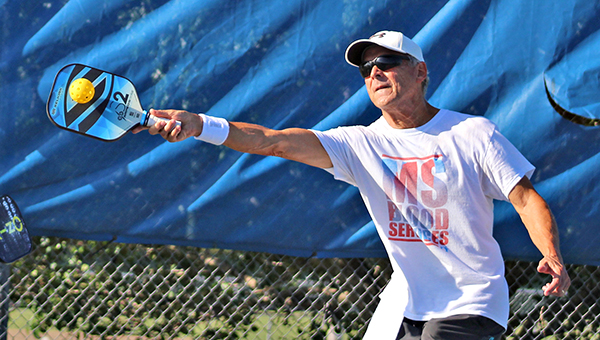 One of Vicksburg’s newest recreational attractions is ready for its first big showcase.

“I didn’t know people were going to travel and come play like they’ve signed up to play,” Sills said. “What’s spurring it is just how pickleball is played all over the place. You’ve got a whole cadre of people out there that travel and play tournaments.”

Pickleball is a fast-growing sport best described as a mash-up of tennis and ping-pong. Players use paddles to hit a plastic ball back and forth across the net on a 20-by-44 foot court.

The sport was invented in 1965 and has caught on in recent years among seniors, although Sills noted it has a following with younger athletes as well. Of the 98 people playing this weekend, Sills said, 34 are under the age of 50.

In September 2021, the city of Vicksburg officially opened a new pickleball facility located at the entrance to Halls Ferry Park. Earlier this year, a group of local players formed the Vicksburg Pickleball Association to help with organizing the city’s first major tournament.

Rick Shields, who oversees the city of Vicksburg’s tennis program and its tennis and pickleball courts at Halls Ferry Park, also helped.

“When we got the new courts we said we’ve got to take advantage of it, and hold tournaments and bring people in from other places,” Sills said. “It gives our local people a chance to play other people they don’t play regularly. That’s a lot of fun.”

The response, Sills added, has been remarkable. Players from as far away as Arizona, Florida and Illinois have registered for the tournament. Some are former Vicksburg residents who are playing in the tournament while visiting family, but the wide draw shows a glimmer of the potential for the courts as an attraction for both locals and regional tourists. Besides those distant states, other players are coming from Alabama, Tennessee and Texas.

“You think about two-thirds of the people coming from outside of Vicksburg, I’m really tickled with the response to it,” Sills said.

Even with nearly 100 people, this event is considered a small one. Larger tournaments often have men’s and women’s doubles tournaments in addition to the mixed doubles division.

Sills said the decision to limit the Vicksburg Pickleball Invitational to mixed doubles only was an intentional one.

“We decided to focus just on a mixed doubles tournament. That made it less numbers of people, but we want to make sure we do a really good job on this first tournament so people want to come back and play future tournaments,” he said. “We thought it was better to do this as a one-day tournament. We thought let’s start smaller and keep our focus so that we can do it first class.”

If things go well, Sills said the Vicksburg Pickleball Association could host another — and possibly larger — tournament in the fall.

So far, the support from not just pickleball players but the community at large indicates Vicksburg could become a destination for the sport.