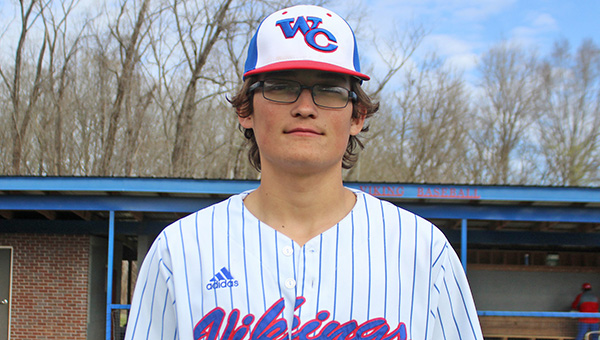 Warren Central pitcher Kylan Landers had nine strikeouts in four innings of relief, and also doubled and scored a run in a 2-1 loss to Northwest Rankin on Friday.

Warren Central took its toughest opponent yet to the limit, but couldn’t push it over the edge.

Nick Monistere hit a solo home run with two outs in the top of the ninth inning, and Northwest Rankin escaped a huge jam in the bottom half to beat Warren Central 2-1 on Friday.

Warren Central (9-11, 2-4 MHSAA Region 6-6A) tied the game at 1 in the bottom of the seventh when Kylan Landers doubled and scored on a two-out error. It almost pulled off another comeback in the ninth.

Blake Channell singled and Landers reached on an error to start the inning, and Braxton McCurley was intentionally walked to load the bases. Northwest pitcher Ryan Herbison got out of the jam without allowing a run, though, and the Cougars (20-2, 6-0) escaped.

Herbison pitched three innings of relief and finished with seven strikeouts. Monistere started on the mound and had 13 strikeouts in six innings.

Adam Francisco went 3-for-4 with a home run and two RBIs for St. Al, and Matthew Pitre also homered.

In game two, Zeke Flattman went 2-for-2 with a double and two RBIs, and Jackson Navarro had three hits and scored twice to lead the Green Wave to a 6-0 victory.

Cathedral pitcher Jake Hairston had eight strikeouts and did not allow a hit in five innings. Tristan Wilbanks broke up the no-hit bid with a one-out single off of reliever Mason Moore in the top of the sixth inning.

St. Al (5-16, 1-11) needed to sweep Friday’s doubleheader, as well as a three-game series next week against Adams County Christian, to keep its playoff hopes alive. Instead, it was eliminated from postseason contention.

Sevier singled in a run earlier in the inning, and a bases-loaded walk tied the game at 4. A few pitches later he stole home to cap a comeback from a two-run deficit heading into the final inning.

Todd Etheridge scored two runs in the game for Tallulah (13-9, 8-1 MAIS District 5-3A), and Paul Michael Machen was 2-for-2 with one run scored.

The Trojans had a much easier time in game one, winning 8-1.

Sevier doubled and drove in two runs, while Dee Morgan was 2-for-3 with two RBIs and two runs scored. Etheridge also had two hits, scored twice and drove in a run.

Morgan started on the mound for Tallulah and pitched a five-inning complete game. He allowed two hits and one run, and had 13 strikeouts.